I strongly hinted Friday morning that Bryan Singer’s Superman Returns (Warner Bros., 6.28), which I’d seen the night before, is a very good film. One thing I felt free to actually say at the time (there was a review embargo in effect) is that it delivers in terms of emotionality and a palpable theme. Now that it’s okay to write something, we need to admit something: Superman Returns is perhaps not a vital movie for our times. We all know it’s primarily an attempt to re-launch a franchise so a bunch of fat guys can make a lot of dough…guys who have more than enough as is.
But despite this uninspired raison d’etre, Superman Returns still feels like a truly personal film that came from somebody’s heart. And this, to me, is an extraordin- ary thing, and why it surprised me as much as it did. 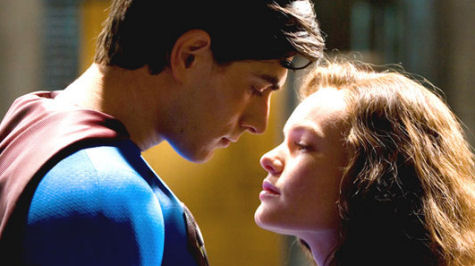 It’s a hell of an upgrade (it refines and deepens in the tradition of Christopher Nolan’s Batman Begins), an extremely reverent nostalgia piece, an above-average chick flick, an extremely sumptous and harmonious piece of work (Singer is a masterful technican and film “composer”) and, frequently enough, a solid action thriller.
For many Superman Returns will probably have to be seen twice — once in a regular theatre and a second time in 3D IMAX. Only about 20 minutes’ worth will be in 3D, but it’ll be worth the price, trust me.
< ?php include ('/home/hollyw9/public_html/wired'); ?>
I said Friday morning that the film has a breathtaking 3D airborne action sequence that delivered the greatest sensory thrill I’ve ever gotten from a mainstream movie in my life. What’s striking is that this sequence is obviously a replay of the finale of Paul Greengrass’s United 93, and that Singer has to be aware what this sequence delivers in a fantasy sense.
The almost bizarre time-trip element in Superman Returns feels curious at first. With Brandon Routh obviously chosen to play Superman/Clark Kent because he resembles Christopher Reeve in his late ’70s heyday….with not only John Williams’ theme music from Richard Donner’s 1978 original Superman but the same kind of blue-laser graphics used in the opening credits…with the return of Lois Lane (Kate Bosworth), Jimmy Olsen (Sam Huntington), Perry White (Frank Langella), a bald- headed Lex Luthor villain (Kevin Spacey), the voice and image of Marlon Brando as Jor-El and even Glenn Ford as Clark Kent’s dad (deceased in the film but with his photo sitting on a mantlepiece in the Kent home)…this is really old-home week.
But it’s more than just a return to the Carter years mentality, and more than an attempt to recreate the fascination that the first two Superman flicks enjoyed over that two-year period. 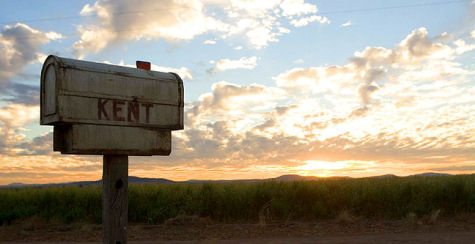 (Fans will recall that Superman II, released in ’80, was partly directed by Donner and partly by Richard Lester, who went on to direct part III entirely.)
Superman Returns feels as if Singer and his team loaded up the finest 2006 CG technology in a big suitcase and time-tripped back to 1982 and ’83 in order to make the Superman III that should have happened (instead of the Richard Pryor version that did).
And yet Singer has made a much better film than part I or part II — craftier, a bit dryer, more fully rendered, less comic book-y, and more deeply felt.
Singer makes movies about gifted outcasts, and this is easily his saddest and most personal to date — not just about a superhero who’s forced to live in his own realm and walks around with a broken heart, but one who’s more or less doomed to stay that way. The poor guy (Routh) is good and gentle, simple but generous of heart…and yet he’s stuck in that blue suit and wine-red cape forever. And either you get the sadness of that situation or you don’t. 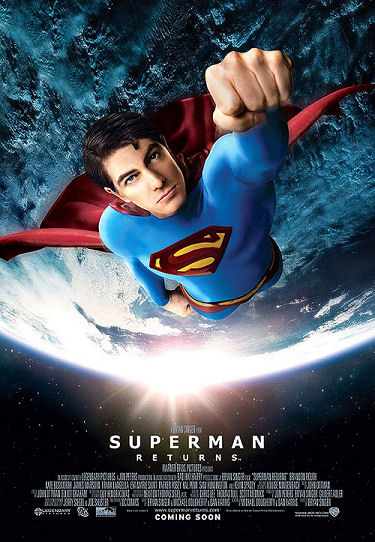 If you don’t you may go out the weekend after Superman Returns opens and join the nationwide spirit-of-Cancun party that will happen in theatres playing Pirates of the Caribbean: Dead Man’s Chest…great.
But if you feel that interior stuff and emotional currents are what make movies whole, and if the wafer-thin attitude dance that was Gore Verbinski’s Pirates of the Caribbean felt like a problem (I say this recognizing that for the vast majority, this emptiness is a celebrated asset), you’re may be more on the Superman Returns side of the fence.
The story is basically about unrequited love — the subtitle should be Love Stinks.
It begins with Superman returning to earth after a five-year absence out in space (a voyage of self-discovery) to find Lois, whom he abandoned when he left the planet, living with Perry White’s nephew Jack (James Marsden) and raising a son.
There are complications, naturally, presented by Mr. Luthor and his latest scheme to destroy and dominate the U.S. and its economy, blah, blah, and I’m not dismissing the generic hero vs. villain material …it’s fine. But the current that matters — the thing that has Singer’s interest — is about Clark, Lois, Jack and the boy…about trust, intimacy, emotional consistency and what it takes to make a family.
At first I didn’t recognize Noel Neill, who played Lois Lane in the 1950s “Superman” TV series, playing a rich lady being fleeced by Luthor at the moment of her death, but there’s no missing Jack Larson, the TV series’ Jimmy Olsen, as a bartender in a scene with the new Jimmy and Clark. 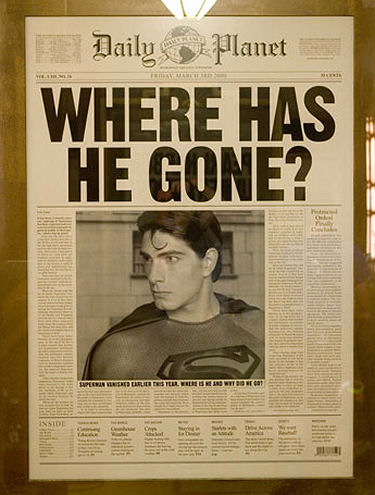 There’s genuine beauty and majesty in the visuals of Routh (who’s a good actor but more noticably a very beautiful man) tearing around in the sky, and particularly as he soars 40 or 50 miles above the globe. There’s one special moment when he’s not exactly flying but orbiting, meditative and statue-like as he looks down at the dull-diamond glow of the clustered cities below, and then he “sees” something and he’s off like a bullet.
I loved especially that Singer ends the film in almost the exact same way that Donner’s does, and yet Singer holds back on one particular bit — the difference between a re-do and a recreation.
Superman Returns is dedicated to poor Chris Reeve, who died in October ’04, and his late widow Dana, who passed last March from lung cancer.