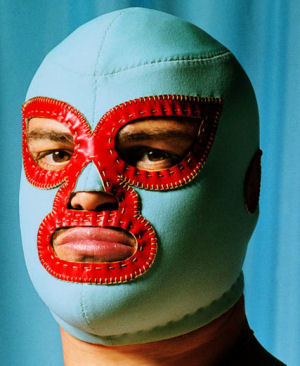 Announcing a very special Hollywood Elsewhere Nacho Libre promotion! With the HE “Hollywood sign” logo hand-woven into the forehead area and my own head shot sewn into the occipital, back-of- the-head area, it’s a very timely, enticing-to-women cabeza accessory for fans of Jared Hess and Jack Black‘s Nacho Libre (Paramount, 6.16). Ideal for wearing to hot parties, hot clubs (i.e., particularly the hard-to-get-into kind that charges 12 bucks for a glass of crappy Chardonnay), baseball games, political rallies, Mexican restaurants, Russian steam baths, etc. Priced at only $24.95 plus shipping — order today! There may be some at this point who believe this is a straight-from-the-shoulder HE promotion done in concert with Paramount’s marketing department. And (I hate being this literal) it’s not. Watch someone write in anyway and say, ‘Hey, man…cool idea!” Wait a minute…maybe it is a cool idea? This just hit me. Frankly, I would half-enjoy owning a Hollywood Elsewhere nacho mask.