What…another story about Leonardo DiCaprio‘s Appian Way hitting the gas on a Timothy Leary biopic? (Playwright Craig Lucas and Leary archivist Michael Horowitz have been hired to write a script.) As I’ve been noting all along, Leo’s been half-heartedly stirring the Leary pot for the last few years and nothing’s happened. 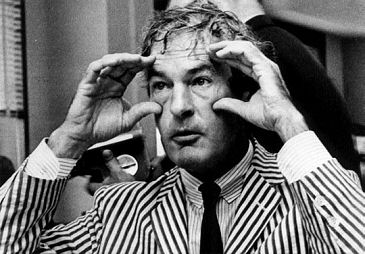 A trustworthy source told me a few months ago that “there’s not a lot of focus” at Appian Way. “Leo is all over the map…he wants to work with Marty on this and that…[Appian Way] doesn’t exactly have a center-of-gravity thing going on.” The film will reportedly focus on Leary’s life between his enrollment at West Point in the early 1940s and his escape from prison in 1970. I’ve mentioned this about 18 times, but now that Lucas is on the case he should definitely read a superb book about ’60s psychaedelia called “Storming Heaven,” written by Jay Stevens.