The marketing execs of Fox Home Video are just as determined to sell Sidney Lumet‘s Find Me Guilty as a dopey-ass lightweight mob comedy as its theatrical distributor, Yari Film Group Releasing, was during its brief theatrical release last March. These guys won’t quit until everyone in DVD-ville is convinced this film is a second-tier wash and probably not worth the rental fee. It is worth it…trust me. 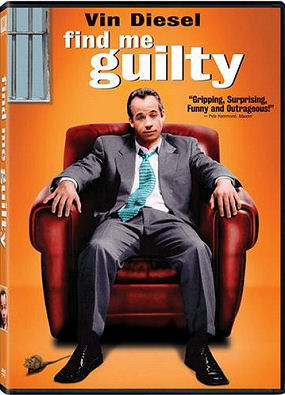 Broadly played at times but meticulous and flavorful and dramatically solid, Guilty is Lumet’s best film since Q & A and before that, Prince of the City. It’s extremely well acted (Vin Diesel, Peter Dinklage, Ron Silver, Annabella Sciorra, Alex Rocco …everyone shines), beautifully shot and edited, and reeking of New York-New Jersey goombah-and-cop culture like many of Lumet’s better films.
I wrote last February that “it’s a tight, no-nonsense court drama that’s not about legal maneuvers or discovering evidence or doing right by the system and justice being served, but mob family values. In a stuffed-manicotti way, Find Me Guilty is as much of a values-based entertainment as The Passion of the Christ, My Big Fat Greek Wedding, The Thing About My Folks and Madea’s Family Reunion. I’m serious.
These values can be summed up by the words ‘don’t rat’, ‘don’t roll‘ and ‘family is everything’. I’m no goombah but I sympathize with these sentiments, so I guess that’s part of the territory.” Here’s the whole piece.