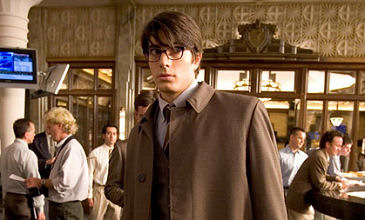 I saw Superman Returns last night, but I agreed not to run a review until opening day. If I left it there some of you might draw conclusions, so let me add without hesitation that Warner Bros.’ caution is misplaced. I need to say at least one thing: I’ve echoed in this space the general interpretation of WB’s decision to open Bryan Singer‘s film on Wednesday, 6.28, instead of the originally announced 6.30 debut, as a desire to maximize the holiday take before the dreaded onslaught of Pirates of the Caribbean: Dead Man’s Chest the following weekend. This view was, in hindsight, partially misleading because it suggested that a better pure-entertainment, bang-for-your-buck element would be coming from Pirates. That will obviously be a matter of perspective as the days advance, but it seems highly unlikely (I almost wrote “inconceivable”) that Pirates will surpass Superman Returns in terms of emotionality and embodying a resonant, fully developed theme. I was watching an interview yesterday with the late Don Simpson on the new Crimson Tide DVD, and at one point he repeated the old maxim that a good movie “can’t just deliver action or theme-park pizazz or laughs or big stars….it’s gotta be about something.” No critic is going to argue that Superman Returns doesn’t fulfill that demand, and if I owned a house I would bet it on the expectation that Pirates will be about two things and two things only — good pizazzy fun (action, humor, attitude, production values) and a total lack of regard for Simpson’s Law. The other thing is that I don’t get is the Advocate– cover idea that SR would have some kind of homoerotic subcurrent. They were dreaming — this is a film about purity of spirit. One final thing: Superman Returns is opening simultaneously in IMAX theatres on 6.28, and about 20 minutes worth (i.e., “selected scenes”) will be show in IMAX 3D. The press was shown a preview of how the 3D footage will look last night after the main screening, and it’s mindblowing. There’s an airborne action sequence in particular that delivered, for me, the greatest sensory thrill I’ve ever experienced from a mainstream movie in my life. There’s no question that anyone within reach of an IMAX presentation of this film HAS TO SEE IT THIS WAY. (Singer has worked out a green light-red light system that will tell moviegoers when to put on the glasses just before a 3D section begins.) Trust me, catching it this way will be an absolute knockout.