Stanley Nelson‘s Jonestown: The Life and Death of Peoples Temple may seem like a provocative L.A. Film Festival film to catch this evening. (It’s at the Majestic Crest at 7:15 pm, and tomorrow night at 9:30 pm at the Laemmle Sunset 5.) But having seen this well-meaning doc at the Seattle Film Festival, I can tell you it pulls too many punches. 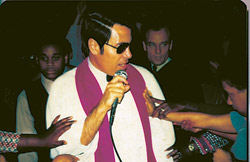 A story of a warped predatory looney who persuaded over 900 people to kill themselves with cyanide Kool-Aid should not be afraid to look at the horror straight in the face. Jim Jones began as an inspired preacher but ended his days as a diseased psychotic. One of his last acts as a bringer of God’s message was to persuade his followers to murder their children. The people who followed Jones’ orders were obviously insane also at that particular moment, and yet Nelson’s film refuses to get angry about any of this. It’s way too moderate.
It tells Jones’ story, all right. It’s well-written (by Marcia Smith), well researched, professionally edited and it uses first-rate footage. But the talking heads are all relatives, parents and former wives-and-husbands of those who died in Jonestown, and Nelson’s big error is trying to show too much respect for the living and the dead. He wants them to have a measure of dignity, and so he goes easy on the followers and what they did, and in so doing winds up going half-easy on Jones.
Tonally, emotionally, Jonestown: The Life and Death of Peoples Temple could almost be a documentary about a dramatic soccer championship match in which the favored home team lost. It was a shame that Jones was so charismatic and imbued and yet so terribly screwed up, the doc seems to say. And how very unfortunate that all those lost people followed him to the jungles of Guyana and wound up offing themselves. A very tragic story, but….well, shit happens.
The point seems to be the victims deserve our respect and sympathy, and I say the hell with that.
The Jonestown tragedy was essentially a San Francisco story, as the Peoples Temple had been based in San Francisco from 1974 until the move to Guyana. The suicides happened only about nine days after the shootings of San Francisco Mayor George Moscone and supervisor Harvey Milk by ex-supervisor Dan White, and there’s just no comparing the neutered impact of Nelson’s doc and Rob Epstein‘s masterful The Times of Harvey Milk (1984), one of the most impassioned and heartbreaking docs ever made about a tragic, untimely death.
What happened in Jonestown was NC-17, but Nelson’s doc is strictly PG-13. There’s no anger or fire in it…no ghastly details, none of the horror, not enough particulars about Jones’ sleazy seducer tendencies, etc. That 1980 Powers Boothe TV movie about Jones (Guayana Tragedy: The Story of Jim Jones) had a lot more intrigue in this regard.