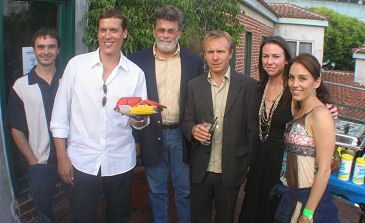 (a) I met the great Eliott Gould, the greatest Phillip Marlowe of all time, at a SAG party in Westwood last night, and I was struck by how amazingly thin he’s become since I last saw him as Reuben Tishkoff in Ocean’s 12….Gould actually looks a good deal thinner that he does in this photo — somewhere between this and his semi-emaciated Long Goodbye appearance…he said he’s taken the weight off because “I’ve accepted supervision”…I said there will obviously have to be some kind of explanation in Ocean’s 13 to explain his changed appearance, and Gould said “Yeah, there will be”, and I asked what it will be, and he said, “See the movie”; (b) Islander rep Jeff Dowd, Hollywood Reporter columnist Anne Thompson, L.A. Film Festival director of programming Rachel Rosen at Sunday’s steamed lobster, melted butter, cole slaw and potatoes party for Islander — Sunday, 6.2.06, 5:55 pm; (c) Marc and Marla Halperin of Magic Lantern, at same lobster-bib party.