At the risk of sounding brusque, Jared Hess’s Nacho Libre (Paramount, 6.16) is to Napoleon Dynamite, his breakout debut film, as Wes Anderson’s The Life Aquatic is to Rushmore or Bottle Rocket.
I know, I know — that’s a damning thing to say. But I’m only trying to qualify what’s right and (only occasionally) wrong with it. It’s really not that much of a letdown.

Let’s acknowledge once again that Jack Black is an authentic genius — it’s not just the manic-volcanic energy inside him, but the way he ladels it out just so, like a mad scientist pouring liquids into glass beakers — and I so enjoyed being in his and Hess’s good company that I didn’t feel that put off during the slack parts.
What’s wrong with Nacho Libre? The style and consistency of attitude are there in full bloom, but you can feel a lack of story tension manifesting around the halfway mark, and it starts to get a tiny bit enervated. And yet it’s a tonally together film, and the funny stuff that works (only about a third of the movie feels “off”) is screamingly nutso, so it all kind of balances out.
< ?php include ('/home/hollyw9/public_html/wired'); ?>
I was basically down with it because of the consistency of the Jared Hess signa- ture. I muttered to myself at one point, “Thank God this movie wasn’t directed by Jay Roach.” Every scene, shot, line and edit in Nacho Libre tells you it was made by a very sharp, ultra-disciplined director who’s in touch with his own particular brand of static flaky-weird humor, and who totally gets the Black trip.
Will Nacho Libre‘s reception be a replay of Napoleon Dynamite‘s? Dismissed by some (I remember all those boomer-aged distribution execs going “naaah” after the first Library screening in Park City) but embraced as a cult thing? I don’t know (kinda doubt it), but there were three or four guys sitting behind me at yesterday’s Nacho Libre screening in Las Vegas who were howling at every bit.
You could argue that Hess’s problem as a director is that he’s too much into the idea of a movie as a series of scenes and statements, and in maintaining the deadpan-ironic attitude at all costs, but not enough into the basics of telling a good story. 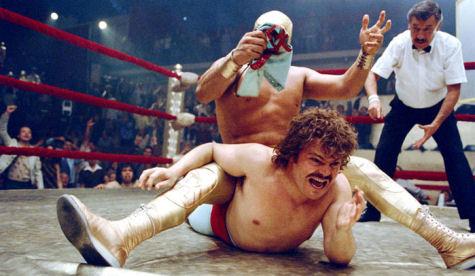 Written by Hess, Mike White and Jerusha Hess (and Black, of course, whose sensibility is all over this film), Nacho Libre is basically one big Mexican joke — an affectionate but at the same time snide and smart-assed portrait of that country’s culturally primitive traditions. Apologies to my Latin friends, but I enjoyed the impudence of this.
Black plays a be-robed Catholic monk named Nacho who doesn’t like living a life of denial and humility. This isn’t revealed right away, but Nacho’s basic yearning is to make money, be a wresting star (a “luchadore”), and make it with the very hot Sister Encarnacion (Ana de la Reguera)…the only problem being their mutual vows of celibacy.
Nacho’s job in the old Oaxaca monastery he shares with other priests is to prepare meals for the orphans who also live there. But there’s no money for basics so all Nacho can do is throw together plates of flavorless bean dip and tortilla chips.
Nacho gradually takes the bull by the horn when he hooks up with a girlyman thief named Esqueleto (Hector Jimenez) — shades of Napoleon hooking up with Pedro — and proposes that they become a luchadore wrestler team, and then use their earnings to buy better ingredients for the orphan meals and white patent-leather shoes for Black to wear as he’s putting the moves on de la Reguera. 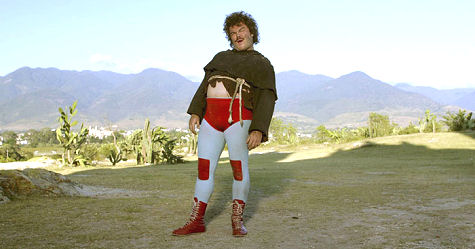 Black carries the whole thing, and the story basically breaks down as follows: (a) Black having a special relationship with fat orphan kid who gets his trip and believes in him, (b) his sneaking out of the monastery to wrestle in the evenings, (c) gradually sharing his inner feelings with Reguera, (d) making inroads into the world of the luchadore with Jimenez at his side, (e) dealing with the unmasking of his luchadore deception, and (f) a final spurt of dejection, despair and then triumph.
I loved Jimenez’s performance — freaky, quasi-feminine, hilarious. I got into the steady supportive gaze coming from the fat kid (can’t identify his real name from online cast lists). I especially enjoyed Black’s performing of two Mexican-flavored tunes, one a spur-of-the-moment ditty he sings at a party, the other a kind of inspirational Tejano love song.
And I generally loved tripping through Black’s beautifully measured performance, which is most likely going to be seen as politically incorrect — offensive — by some in the Latin sector. Applause to Black for having the cojones to not be afraid of this.
Said it before, saying it again: Black should have made a movie with Stanley Kubrick. If Kubrick’s health hadn’t given out and these two had somehow hooked up with the right project, it might have been like Kubrick and Peter Sellers all over again.