Last Thursday night (6.22) as the L.A. Film Festival was unveiling The Devil Wears Prada in Westwood, a quiet research screening of David Fincher‘s Zodiac happened at the Chinese 6 on Hollywood Blvd. (where an all-media showing of Bryan Singer‘s Superman Returns was unspooling as well). The Fincher was shown under the title of The Chronicles (oh, God… we’re back to that one again…don’t ask), and three guys have posted reactions on Ain’t It Cool. 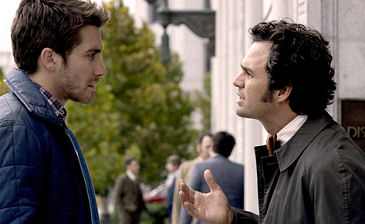 Jake Gyllenhaal, Mark Ruffalo in David Fincher’s Zodiac (or is it The Chronicles?)

The cut ran just over three hours, and 66 and 2/3 percent of the posters respected and admired it to varying degrees. (A third feels it may get there with further editing and fewer laughs.) Obviously Paramount’s motive for researching Chronicles/ Zodiac is that they want to give Fincher reasons to prune it down and make it shorter. (The eternal distributor mantra.) You may have read here (as well as on the IMDB and Coming Soon)that Paramount intends to bypass a late ’06 release and open Chronicles/Zodiac in January ’07, although that may just be an attention-getting diversion strategy with a plan to open it platform-style in New York and Los Angeles in mid to late December for critical and awards-consideration. Anyway, the most interesting passage of the three reviews is from a guy called “One Time Only”. “I go to test screenings all the time but never write in because I think the filmmakers shouldn’t have to have their rough draft scrutinized on the net,” he says, “but I’m breaking my silence on this one time because I’m concerned the film will get butchered by ‘the process’. As it stands now The Chronicles (or is it just Chronicles?…unsure) is over three hours long. It’s loose, slow, over-ambitious and it may just might be a masterpiece. It’s much more seamless than some of his other films in which the visual style calls attention to itself. What we end up with is a very visually interesting movie that doesn’t attack your senses. The filmmakers did an excellent job capturing the 70’s to the smallest of details as well. I heard someone in the audience gripe that the film felt like a novel, which actually strikes me as a fair assessment. This is a seven-course meal no doubt about it. To call this ‘another serial killer film from Fincher’, as I foolishly did in the past, does an enormous disservice to the film. This is not Se7en 2. This is a serial-killer film the way Heat is a cops-and-robbers film.”