Forbes has reported that Adam Sandler made $29 million between June ’05 and June ’06. But a new year has begun, so to speak, and Adam needs to start working on the next $29 million . That’s where the fans fit in. We need to go out and support Sandler’s Click (Columbia, 6.23) to keep the bandwagon rolling. 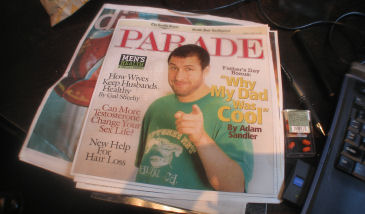 Obviously we aren’t obliged to do this, but shouldn’t we? Don’t we owe it to the guy? Sandler needs to keep rolling in clover, and he isn’t going to be pulling down the monster bucks forever — he’s working within a limited window (as we all are), and now’s the time.