Two late-inning observations should be be kept in mind as you’re reading Claudia Eller‘s summary of “The Man Who Heard Voices: Or, How M. Night Shyamalan Risked His Career on a Fairy Tale,” which appears in today’s (6.23) L.A. Times. 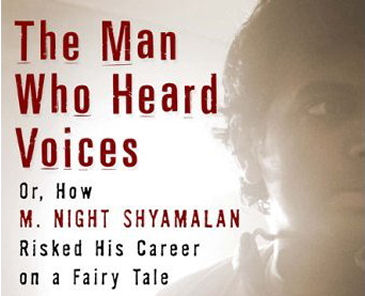 The book, which Gotham will be putting in stores on 7.20, is Night’s traumatic first-hand memoir (as told to Sports Illustrated writer Michael Bamberger) about how his longtime relationship with Disney execs and particuarly production president Nina Jacobson went south last year over Jacobson’s blunt criticisms of Shyamalan’s script of Lady in the Water (Warner Bros., 7.21). At a 2.15.05 dinner attended by Shyamalan, Jacobson and Disney distribution chief Dick Cook at a Philadelphia restaurant called Lacroix, Jacobson reportedly said to the director, “You said [the script] was funny — I didn’t laugh. You’re going to let a critic get attacked? They’ll kill you for that. Your part’s too big — you’ll get killed again. What’s with the names? Scrunt? Narf? Tartutic? Not working, don’t get it, not buying it, not getting it…not working.” The two aftermath thoughts are (a) Shyamalan’s confession to Jacobson during a March ’06 breakfast meeting at the Hotel Bel-Air that Shyamalan “had realized that ‘it wasn’t Nina’s fault that she didn’t get the original Lady script, it was Night’s fault'”, and (b) a comment that Jacobson passes along to Eller about “the inherent difficulties of the ‘patron-artist’ relationship”, to wit: “Not seeing eye to eye on a particular piece of material doesn’t have to be the end of a relationship. It may not always be easy to have an honest exchange, but in order to have a Hollywood relationship more closely approximate a real relationship, you have to have a genuine back and forth of the good and the bad. Different people have different ideas about respect. For us, being honest is the greatest show of respect for a filmmaker.” I know how much it hurts to have people tell you that what you’ve written isn’t any good, but very few people in this town practice a policy of honesty between colleagues, as Jacobson advocates. Hers is a rare, mature, right-on way of going about it. The final perspective will be at hand when WB starts showing Water to critics, probably within the next couple of weeks.