Winners of the 32nd annual Seattle Film Festival awards (called the “Golden Needles“) were announced about 90 minutes ago, and the audience award winner for Best Film went to Michel Hazanavicius‘ OSS 117: Nest of Spies , the French-made espionage spoof that’s been a big hit in France since opening there in early May. The audience award for Best Documentary went to Rickie Stern and Annie Sundberg‘s The Trials of Darryl Hunt. 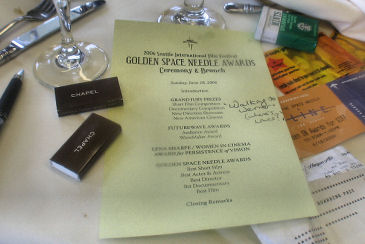 There were several other awards I don’t have time to mention, but the jury bestowed a “special mention” upon Linas Phillips‘ Walking to Werner, a doc about a guy who’s half-imbued and half-weird (Phillips) walking all the way from Seattle to Los Angeles as a kind of tribute to director Werner Herzog. I respected Phillips for doing the walk and for shooting a mildly diverting, half-interesting record of his journey, but he is one weird cat and so is the movie.