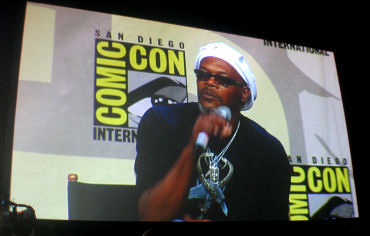 Samuel L. Jackson having the time of his life during yesterday’s Snakes on a Plane presentation in Hall H at Comic-Con, about five minutes before an Animal Planet fan asked if Jackson thinks that the snakes in the film really deserved to die, to which Jackson replied, “Hell, yeah, they deserve to die!…and I hope they burn in hell!” — 7.21.06, 6:40 pm.

Don and Walt of Steely Dan send an open bitch letter to Luke Wilson, although the letter is mainly about Owen Wilson and his sell-out movie You, Me and Dupree. Don and Walt’s main point is that the writers of Dupree (and maybe Owen also, since he produced the film) ripped off the idea behind their Grammy-wining song “Cousin Dupree” (read their letter…they go into the whole thing). They want Owen to fess up in some kind of friendly way or else theyr’e talking about going to their lawyers and making trouble.

I know absolutely nothing, but I’ve been told by two tipsters that Heath Ledger may be negotiating to play the Joker in Chris Nolan‘s upcoming Batman Begins sequel, which will come out sometime in ’08. The reason it may be true is that Ledger likes to play edgy rascally characters, and a role like this fits right into that template. Otherwise the tip may be pure fantasy.

I’ve been at Comic-Con for six hours and I’m I was so uncomortable from the relentlessly frigid air-conditioning that my body finally couldn’t take it anymore and I had to leave right in the middle of the 20th Century Fox presentation. Not that this felt like any terrible loss. Fox’s first presentation was four or five minutes of fresh footage from Stefen Fangmeier‘s Eragon (opening in December), another Star Wars-y, Dragonheart, Lord of the Rings CG epic about a young man from a medieval netherland called upon to fulfill his destiny as a warrior-leader by taming a dragon and swinging a sword and defeating evil. There was appreciative applause from the Comic-Coners in Hall H but really, c’mon…how many times is Hollywood going to make this same movie? How many years, decades, millenia will fans of big-myth movies turn out for this stuff? Can’t the geeks spot a wannabe when they seen it? Edward Speleers, the young actor who plays Eragon the blond hero, showed up and took a bow and answered some questions along with Fox 2000 chief Elizabeth Gabler. Speleers’ Eragon costars are Sienna Guillory, Jeremy Irons, Djimon Hounsou, John Malkovichand Robert Carlyle. Next was a presentation for Pathfinder…you don’t want to know. Suffice that I chose that moment to duck out and walk the five or six blocks to the parking lot where my car is parked so I can get my jacket and not have to freeze to death during New Line’s Snakes on a Plane presentation later this afternoon.