The first indie film superplex in the country is being built right now in West Los Angeles…ooh-rah.
One doesn’t normally think of independent, alternative and foreign movies playing in big, swanky, state-of- the-art theatres…but that’s the deal with the Landmark Film Center, which will open in June 2007. Twelve screens, three stories tall, stadium seating, a lounge, a wine bar, a couple of restaurants and a book store. Like the Arclight Cinemas in Hollywood, only newer and a few miles closer to the sea. 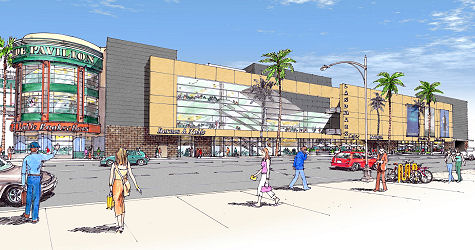 And with totally free parking (which beats the Arclight’s policy of always hitting you up on the way out, even with validation) as well as smiling valet guys in white shirts and black vests hanging out in front.
Being a Landmark Theatres project, people will probably refer to this destination as the Landmark or the LFC . I like LFC better, even if it sounds vaguely akin to Ken- tucky Fried Chicken. If I were Landmark’s marketing guy I would suggest calling it the LBD, or the Landmark Big Dick. Just kidding.
< ?php include ('/home/hollyw9/public_html/wired'); ?>
An indie superplex is a very up-to-the-minute deal.
Seeing a foreign or indie-type film in L.A. has always meant going to a small or mid-sized plex — either the Landmark’s stand-alone Nuart or that twin-screened operation on Wilshire and 14th, or the shoebox miniplexes (Landmark’s defunct Westside Pavillion plex or Laemmle’s Sunset 5, which has the worst theatre seats in the world) or Laemmle’s two-screen art theatres on the Wilshire strip in Beverly Hills.
But 11 months from now, the LFC will change all that. L.A. movie mavens will be able to see the latest Gus Van Sant or Jim Jarmusch or Wim Wenders film in a much more plush and archecturally hip environment. I’ve never seen alternative fare myself in a posh stadium theatre except at the Toronto’s Cineplex at Bloor and Yonge during the Toronto Film Festival, and I definitely won’t mind having this option in my back yard. 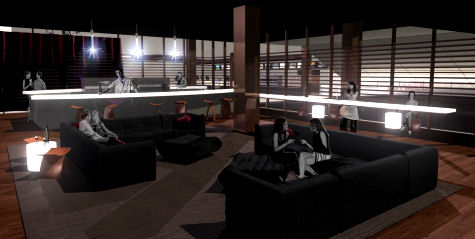 Landmark Film Center bar, where I hope they won’t be charging $10 for mezzo-mezzo California Chardonnay.

Moviegoers have developed a taste for first-class moviegoing over the last six or seven years, which means that today’s exhibitors are looking at a fairly simple equation: provide stadium seating in a plush, uptown atmosphere, or sooner or later you’ll be dead. Landmark, which has 57 theatres in 23 markets nationwide, is simply recognizing this fact and getting in step.
The yen for stadium seating “started around ’98,” says Landmark’s head film buyer Ted Mundorff. “People started voting with their pocketbooks, saying they wanted stadium seating and they weren’t going to support old-style theatres” — seats built on a slightly graded or sloping floor — “if presented with any kind of choice.
“When the AMC Grand 24 opened in Dallas with modern stadium seating, it absolutely changed the town,” he says. “Same with the Mission Valley 20 in San Diego. It was very clear what people wanted.”
The success of Pacific’s Arclight — a first-rate superplex in Hollywood with cavernous theatres and state-of-the-art projection and sound — bears this out, and AMC having just built their new plex in Century City is also part of this trend.
The Landmark Film Center “will be very complimentary to the Arclight experience,” says Mundorff. 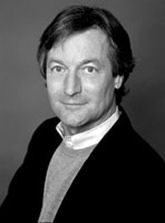 The sightline advantage is the main stadium-theatre selling point, but people are also into bigness these days. The big hotels, particularly the ones in Las Vegas, Atlantic City and Cancun, are measured in hundreds or thousands of square yards. McMansions are the going thing all across the country with buyers who can afford them. Exhibitors are merely following suit by building McTheatres.
The size of the LFC stadiums “will vary,” says Mundorff, “with nine falling under the small or intimate category to three fairly large ones.” The plex will have “full digital capability, and full 35mm capability,” he adds.
How will the LFC affect the business and the programming at West L.A.’s Nuart? “It will give us the flexibility of playing even more product at the Nuart,” Mundorff answers. I’m not sure what that means, but if the IFC catches on fewer patrons will be buying tickets at the Nuart, no? The two will be only a mile or so apart.
I’ve also been told that the L.A. Film Festival, which enjoyed a resurge a few weeks ago by moving to Westwood, is planning on staging a significant portion of its events at the LFC next summer. Good idea.
I drove by the LFC construction site the other day and all you can see is a big green tent. Maybe Los Angelenos don’t like to look at brawny construction workers kicking up dust, or maybe commercial developers feel it’s not attractive enough or something.
They don’t do the tent thing as much in Manhattan. You can always look through the hole in the wooden fence bordering any construction site and see what’s happening. It’s part of the grit that goes with that town. Coverups are more the thing in L.A. — facelifts, green tents, scenery-blocking billboards. 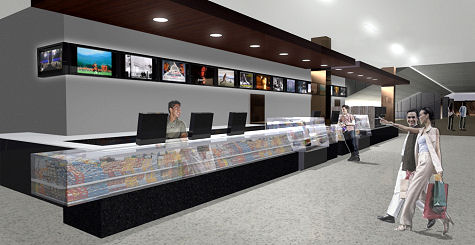 And let’s not have anyone selling micro-bags of popcorn for $5.75 either.

But these artist illustrations (sent to me by Landmark uber-publicist Melissa Raddatz) provide an idea of the LFC experience. Look at the photo directly above this graph — the smiling guy approaching the popcorn stand (i.e., the one with the girlfriend) looks a lot like Hank Azaria. And the wine bar looks cool. A place to meet hot women with good taste in movies.
The main accomplishment of the LFC will be, just for redundancy’s sake, an upgrading of the indie-film experience — a larger-environment, richer-impact thing that not only ties in with current exhibition trends but may restore a sense of specialness to the indie-film watching.
McTheatres, after all, are the closest thing we have these days to the old movie palaces that were fairly standard in this country from the 1920s to 1960s. They’re also a blessed reversal of the shoebox megaplex trend of the late ’70s early ’80s, which everyone hated.
Big swanky movie theatres are, in a sense, holy places because of the big-temple atmosphere. As film essayist F.X. Feeney told me this morning, “Movies in big theatres are like ball games in that they deliver euphoria to masses of people on cue. Churches and ballgames and big theatres are all kind of tied together in this sense, all part of the American spiritual experience.”