Around 9:30 last night I started to read Michael Bamberger‘s book about M. Night Shyamalan‘s troubles in writing and directing Lady in the Water, intending only to sample a chapter or two. And I’d damn near finished the whole thing by 1:30 this morning.
“The Man Who Heard Voices: or, How M. Night Shyamalan Risked His Career on a Fairy Tale” (Gotham, 7.20) isn’t just expertly written, and it isn’t just an intimate, fascinating, inside-the-head-of-a-filmmaker saga about the making of a movie in the style of, say, Julie Salamon‘s “The Devil’s Candy.”

It’s a very emotional story about Night’s belief in himself as both a writer and a director, and Bamberger’s writing is such that you feel Night’s anxiety very fully as the goblins start to come out. A cut of Lady in the Water gets good numbers in a research screening at the end of the book, so there’s a happy ending or sorts, but what a grueling, lonely journey it was for Shyamalan to finally get there.
Night doesn’t come off like a petulant child in this book — not to me. He comes off as a very serious, driven and super-focused dude who deep down is feeling scared and haunted and intimidated every almost step of the way. He may seem like a prima donna to Peter Bart, but Hollywood is not about making refrigerators or selling coat-hangers, and anyone who can’t roll with insecure eccentric types who listen to spirit voices probably doesn’t belong here.
< ?php include ('/home/hollyw9/public_html/wired'); ?>
The Lady in the Water is a little bit like E.T. — about a human becoming friends with and then coming to the aid of a non-human visitor. It stars Paul Giamatti (Sideways, Cinderella Man) as an apartment-building superintendent and Bryce Dallas Howard (Manderlay, The Village) as a kind of mermaid.
The book follows Shyamalan through the writing of various drafts of his screenplay …to his breakup with Disney over Nina Jacobson, Oren Aviv and Dick Cook not getting it (which happens early on, at the end of chapter two)…to his cutting a deal with Warner Bros.’s Alan Horn and Jeff Robinov…to the location scouting and then shooting of the film…to his uncertain relationship with his erratic cinematographer Chris Doyle…to the finishing and the marketing and test-screening of the film.
I feel so closely acquainted with everything that went down that I don’t know if I can watch The Lady in the Water with any impartiality this coming Wednesday. 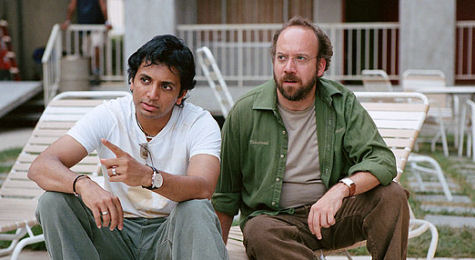 The core of the book is about Night’s certainty that he has no choice but to listen closely to voices that speak to him about creative matters as they come up (and certainly a lot more closely than to various Doubting Thomas colleagues who don’t get his script, or what he’s on about), and the very arduous process Night goes through as a result of this conviction.
It’s particularly touching in what the book implies but doesn’t quite say, which is that writing screenplays is a hellish, wandering-in-the wilderness process for some, and that Shyamalan is probably a better director than he is a writer, and that he’s also a kind of prisoner of a very rarified realm.
Night isn’t content to delight art-house audiences — he wants to reach average Joe’s in Duluth, Minnesota, and that means working in big-budget realms and with big studios and big stars, and the more money at stake the more an artist is pressured to compromise.
Here’s Bamberger describing Night’s concerns about reactions to his Lady screenplay: “He knew that if he wrote the wrong words, if he screwed the thing up, he could be viewed as a kook or worse. The forces of the industry would require him to become an assembly-line director, or retreat to the art houses, and once you’ve had a taste of feeing the masses, you don’t want to do that.” 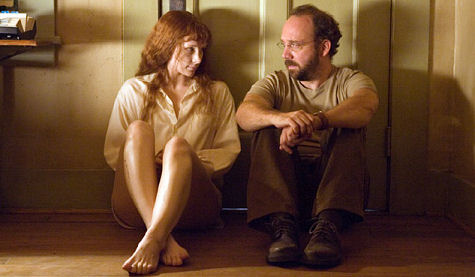 As Neil McCauley says to Roger Van Zandt in Heat: “Forget the money.” To hell with the legend of The Sixth Sense and the huge success of Signs (“I see green people”), and fuck the $1.5 billion Shyamalan’s films have made so far…get shut of it, shut it out.
What’s so terrible with scaling down and making movies for a somewhat smaller but hipper clientele? Night is worth about $30 million bucks, give or take…how much more does he need?
Night obviously knows that corporate Hollywood doesn’t really want to take a creative journey with anyone — it just wants the power and the glory that comes from releasing a hit. He should focus on making films close to his heart, even if it means taking a pay cut. The rest will sort itself out.
Here are some JPEGs of excerpts from the book — read them and you’ll see what I mean about the intimate tone of it. Reading them will also make it obvious to you that Bamberger is an excellent writer. I think one or two overlap, but here they are: Excerpt #1, Excerpt #2, Excerpt #3, Excerpt #4, Excerpt #5, Excerpt #6, Excerpt #7 and Excerpt #8
And if you haven’t seen Night’s American Express commercial, here it is.