Here’s a piece listing the screen’s great pirate characters …dismissable. A more diverting subject stirred by Pirates of the Caribbean: Dead Man’s Chest are two other eye-filling films about ships at sea, both released in the early ’60s, that aren’t available on DVD.
The one I’d like to see the most is Peter Ustinov‘s Billy Budd, a 1962 Allied Artists release that bombed when it came out. I have fond memories of Budd ‘s widescreen black-and-white Scope (2.35 to 1) photography, and think it’s criminal — derelict — that it’s only been transferred on a pan-and-scan VHS basis so far. 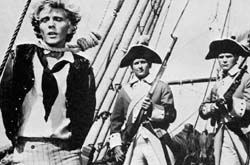 Budd lacks the moral complexity of Herman Melville’s novel but I’ve always found it fairly satisfying. It has four or five fascinating performances including those by Terrence Stamp (Budd), Ustinov (a too-likable Captain Veer, but interesting for the specificity and discipline that Ustinov brings to all his performances), Robert Ryan (an especially dark and decadent Claggart) and Melvin Douglas (Dansker).
The other (and I’ve been mentioning this for years) is Lewis Milestone‘s Mutiny on the Bounty (1962), which falls apart at the end but is moderately stirring in an obvious mainstream-Hollywood way for the first two thirds (or is three quarters?), the high points being the rounding-the-horn and mutiny sequences.
The thing that needs to be captured and restored by a good DVD producer is the high-quality photography, since Bounty was shot by dp Robert Surtees in the Ultra Panavision 70 process (which delivered a 2.76 to 1 aspect ratio) and has really never been seen in its full visual splendor since the roadshow engagements that happened during Bounty‘s initial run in late 1962. 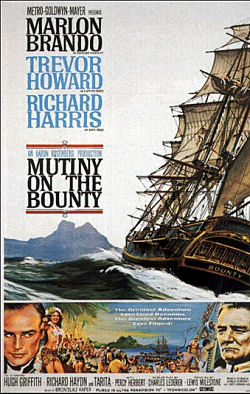