Jack Warden, who died on 7.19 at age 85, was one of the greatest character actors of the 20th Century, and you don’t have to look any farther than his incredibly skillful and heartfelt performance as Max Corkle in Warren Beatty and Buck Henry‘s Heaven Can Wait (1978) to verify that fact. 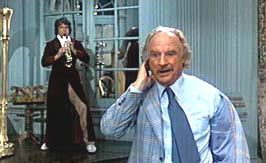 Just chapter-flip to the scene when Corkle comes to visit billionaire Leo Farnsworth (Beatty), who’s actually died and been inhabited-reanimated by the spirit of Corkle’s old football-player pal Joe Pendleton. Corkle is confused when Farnsworth starts talking to him like they’re good buddies, but the best bit happens when Farnsworth tries to explain the rules of life, death, probabilty and outcome. Significantly, the camera stops cutting away to Beatty and stays entirely on Warden for nearly a full minute as Corkle’s discomfort increases with each new mind-blowing assertion by his host.
Warden’s first standout performance was in Sidney Lumet‘s Twelve Angry Men (1957) as the marmalade-salesman juror who can’t wait to end deliberations so he could make it to a Yankee game. His other four knockout roles were as Lester the moustachioed businessman in Hal Ashby‘s Shampoo (’74), Washington Post editor Harry M. Rosenfeld in Alan Pakula‘s All The President’s Men (’76), twin used-car salesmen Roy and Luke Fuchs in Bob Zemeckis ‘s Used Cars (’80), and Paul Newman‘s co-counsel Micky Morrisey in Lumet‘s The Verdict (’82).
Come to think of it, Warden’s Shampoo performance may be the equal of his work in Heaven Can Wait . The scene near the finale when Lester reviews the shambles of his life while sitting in the modest home of hairdresser George Roundy (Beatty) is a near-great one. As I recall, it ends with Warden saying, “God, I need a drink.”