This is ridiculous! In the wake of her recent image upgrade as one of the shrewdest and most perceptive studio execs around because she told M. Night Shyamalan that his Lady in the Water script needed work (Michael Bamberger’s description of their disagreement is the most riveting portion of The Man Who Heard Voices) and with hundreds of millions rolling into studio coffers from the recent success of Pirates 2, Disney — of all the times to do this — has axed Nina Jacobson as president of production and replaced her with marketing president Oren Aviv. 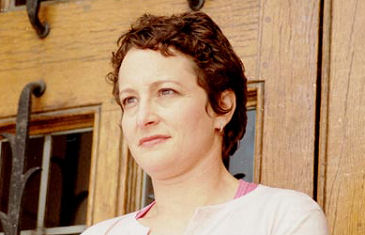 Nikki Finke is reporting that “the uber-ambitious Aviv helped set the stage for Nina’s descent (and his ascent) by telling Disney a while ago that Paramount’s Brad Grey had offered him the same position that Gail Berman eventually took.” I rang Jacobson’s office about 45 minutes ago after hearing the news. This is one of the most bizarre and nonsensically out-of-the-blue whackings in Hollywood history. Disney is looking to scale back on feature production and make more family-friendly films. Fine…and the fang-toothed, razor-clawed Aviv is better for the job of cranking these films out than Jacobson?
“The studio is undergoing a major reorganization, and there simply isn’t room for everyone in the new structure,” Jacobson said in a statement. (Yeah, sure thing …there wasn’t “room” for Disney’s whip-smart president of production.) “I love the company and it has been a great honor to be part of building the Walt Disney brand. I’ve had the opportunity to work on films that I love, with filmmakers I admire and colleagues I adore. I’m sorry to go but I am proud of what I’ve left behind, a vibrant movie studio with major franchises and thriving relationships with some of the most talented filmmakers in the world.”