I saw King Kong twice last December, and then I tried to watch the DVD a couple of months ago. Not even bothering with the nothing part — i.e., the first 70 minutes — I started my viewing with Kong taking Naomi Watts into the jungle and Adrien Brody and Jack Black and the other guys following. I sat down and I tried but I couldn’t stay with it. In fact I couldn’t stand it. 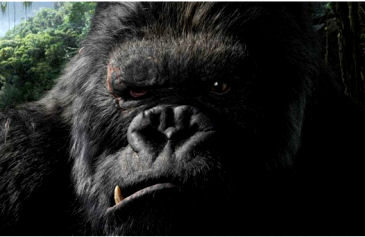 Jackson’s shameless huckster instincts — the anything-goes, push-it-to-the-limit choregraphy and total-madman camerawork that he brings to the big action scenes — don’t just grate on you after a couple of times. They make you feel ill. The reason for this nauseau is realizing that the big Kong moments are entirely about Jackson’s Barnum & Bailey ego — the man is an incorrigible showoff and an overcoddled enfant terrible— and not in the least about his wanting to get the audience to believe in the characters or the reality of the situation(s) they’re up against.
I couldn’t help but giggle and feel turned on by the Dino Run sequence when I first saw it (my second viewing happened the next day), but try watching it on DVD and you’ll see what I mean. After a minute or two all you want to do is go into the kitchen and find a bag of tortilla chips.
Naturally…what else?…Jackson and Universal Home Video will soon be bringing out an extended version of King Kong on DVD, lasting God knows how much longer. It’ll probably make money because of the extra monster sequences and whatnot, and the visibility of the new DVD will get a boost from a special promotion at Comic Con next weekend. 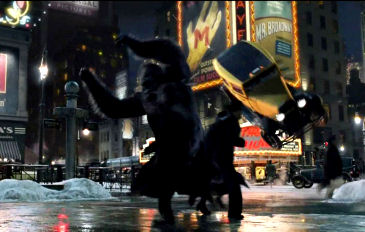 I don’t think any filmmaker has answered criticisms of his film being too long in this manner since…well, since director Lawrence Kasdan came out with an even longer cut of Wyatt Earp (212 minutes) after critics said his 191 minute theatrical version was too much. (My opinion is that the theatrical cut of Wyatt Earp was satisfyingly full and rich, and that the 212-minute version was even more of a great meal…really. It’s a meditative right-wing character piece that really works.)
Last March Entertainment Weejly‘s Hannah Tucker asked Jackson if fans can”expect an extended version of Kong on DVD in the future?” and jackson replued: “I hope so — that’s very much up to Universal. Obviously, doing an extended cut of Kong is expensive…. Every extra minute of film that you add, you’re adding potentially another 20 or 30 more visual effects shots. So I think Universal are getting their heads around all that. We’re figuring out what the sequences could be, because we do have a lot of really great scenes that we didn’t put into the movie — some very very exciting dinosaur sequences — so I’m hoping there will be an extended cut.”