Way of the Ass

Way of the Ass

[Spoiler Note: If you consider a single specific description of a gross-out moment in a Kevin Smith film to be an earth-shaking spoiler, read no further.]
I can roll with bestiality as an occasional online diversion. Every five or six months, I mean. I’m not a subscriber to any of the farm-love sites, but an actor once sent me a video file…you don’t want to know. But I’ve never seen a donkey show in Tijuana, and I’m proud that the notion of attending one has never crossed my mind. 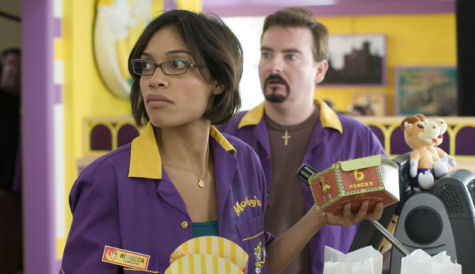 How did I get started on this subject ? Oh, yeah….Kevin Smith’s Clerks 2 (Wein- stein Co., 7.21), which does the gay-donkey thing inside a New Jersey fast-food joint called Mooby’s in the third act with the whole crew (Brian O’Halloran, Jeff Anderson, Smith, Jayson Mewes, Rosario Dawson, Trevor Fuhrman) alternately fascinated and horrified, etc.
I come from a decent middle-class New Jersey family, and I’ve read read hundreds of good books. I have two children, I can sing on-key and play drums, I know how to write, I’ve been to Paris and Prague and Rome, I know some of the best people on the planet, I used to be heavily into the Bhagavad-Gita, and here I am riffing on a scene in a film in which a bald leather-clad gay guy blows a donkey and then lubes the poor animal and anally goes to town
< ?php include ('/home/hollyw9/public_html/wired'); ?>
I was fine with Clerks 2. Okay…define “fine.” I think it means feeling okay, smiling, laughing now and then…having an alpha time of it.
I’m a fool for Jayson Mewes (whom I once called “the Marlon Brando of stoner comedies”) and also Ms. Dawson, whose passion and vivaciousness upgrades this film all to hell. (As Smith put it yesterday during a round-table session at the Clerks junket, Dawson’s top-grade acting is verified by the fact that “she makes you believe that she would fuck Brian O’Halloran.”) And it has a Jackson Five musical dance sequence that rocks out pretty well. 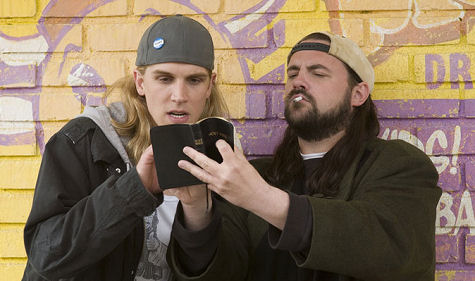 I presume I don’t have to go into the basic drill about O’Halloran and Anderson playing older, slightly chunkier versons of the Dante and Randal characters they portrayed in Smith’s original Clerks…you know this. The guys getting older and still treading water in a retail service job (serving fast food instead of selling smokes), and wondering what the hell’s next.
But the energy and the humor is up and down, in and out…and I just wanted more. I was hoping for Clerks 2 to be faster and darker. That’s just me. It hangs in there true and steady, but it doesn’t build all that much as it moves along. It keeps to a certain deliberate pace and I guess I’m more comfortable with more wildness. I wanted more boyfriends and girlfriends arguing and challenging each other, more pushing the limits of propriety, more confrontations with customers, more shoving ….something looser and ruder.
I can honestly say that until last week I’d never heard, much less used, the term “porch monkey”, but Clerks 2 has rectified the first half of that situation. (If you want an idea of how racist-ugly Americans can be, check out this Wikipedia page on ethnic slur terms.) And I agreed with Randal when he asks in the film, ‘Why is ‘porch monkey’ necessarily a racial slur? It refers to a lazy guy doing nothing but hanging out on his porch. And monkey isn’t racial thing — it just implies “devolved.”
Little Miss Sunshine does something pretty amazing. It sometimes drops down into some pretty dark places, but then two minutes later it bounces right back and does something pretty damn funny, or at least amusing, and sometimes touching. With the memory of that film in my head, I was kind of hoping for some meaner, grislier, heart-of-New-Jersey darkness stuff in Clerks 2. 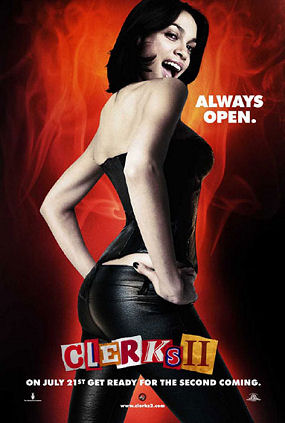 Kevin Smith is too nice and mild-mannered, I guess, to go in that direction. I know him pretty well and it’s really not a rumor — he’s one of the gentlest and giving-est guys working in this town. (What do you want me to do, lie about this?)
Thing is, Clerks 2 is about something very real and not altogether pretty — what happens when under-the-radar guys get into their 30s and they’re still doing nothing with their lives? What’s it like to deal with this? What options are possible? Are people doomed by this age, or do they still have a shot?
The despair levels that I’ve seen among the unambitious knockaround types I know from Fairfield County are not pretty. Rage sometimes erupts out of nowhere and then it’s “whoa….look out.” These guys are not living lives of any fullness or self-satisfaction. And there’s no one like Smith to point a finger at something psychological or sociological and say, “Forget what you’ve read or heard — this is what’s really happening.”
I think if Smith wanted to get down and make a funny movie that also takes a probing look at a sad situation that may be happening with — who knows? — tens of thousands of GenX slacker types, he could do it with one hand tied behind his back. But he hasn’t chosen to, and he’s cool with that. He’s just not a fire-in-the-belly John Osborne or Chuck Palahniuk. 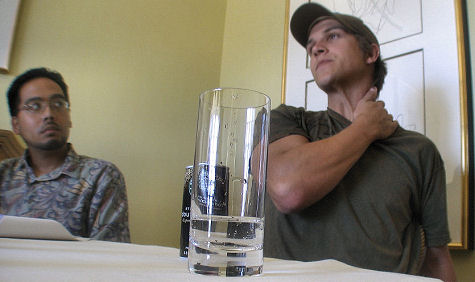 Nothing against Anderson and O’Halloran, but I would have preferred seeing another Jay and Silent Bob film, or even one that’s mostly about Jay. Call it a weakness, but I think Mewes is a truly gifted madman. I peed in my pants at the Silence of the Lambs stuff he does in Clerks 2, and I just think he’s a star, and that he’s got more X-factor magnetism than Anderson or Halloran have any day of the week.
I loved the Battle of the Trilogies debate scene (Rings vs. Star Wars). I was okay with the donkey-blowing, and cool with the urine ice being put into the glass of coke. I laughed at the porch monkey thing despite the negatives. The energy from Rosario Dawson is glorious when you consider the contrast. The vocal energy and the feeling in her eyes…Smith was either lucky or inspired or both when he decided to try and bring her into this.
I like O’Halloran’s sad, soulful eyes and his voice — he can do romantic lines pretty well — but I wasn’t quite comfortable with his puffy Irish kisser. With two women liking him enough to chow down on him, the guy should have dropped some pounds before shooting began. And what’s with the hair? I sat next to him during the junket yesterday and it’s kind of sandy brown, but his hair is dyed a kind of inky dark brown in the film and doesnt look right — like he did it himself at home.
Why was I cool with Clerks 2 but hated You, Me and Dupree? Because at least Clerks 2 has some genuinely funny stuff that kicks in from time to time, and because Mewes is funnier than Owen Wilson, and because Rosario Dawson kicks Kate Hudson’s ass.