Earlier this week Linday Lohan‘s rep Leslie Sloane-Zelnick said that her client hadn’t shown up for work on the set of Morgan Creek’s currently-rolling Georgia Rule and had subsequently been taken to an L.A. hospital because she was “overheated and dehydrated” because she was “filming in 105-degree weather for 12 hours.” Horseshit, Morgan Creek chief James Robinson has essentially declared in an angry 7.26 letter sent to Lohan and her reps. And now The Smoking Gun has gotten hold of a copy and posted it…good going! 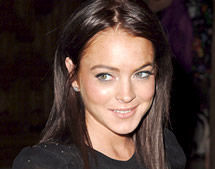 In the letter, Robinson calls Lohan’s recent behavior “discourteous, irresponsible and unprofessional” and that she’s “acted like a spoiled child and in doing so [has] alienated many of [her] co-workers and endangered the quality” of Georgia Rule, a Garry Marshall family heart-warmer now being with Lohan, Jane Fonda and Felicity Huffman topping the cast. The IMDB log line says it’s about “a rebellious, uncontrollable teenager (Lohan) who is hauled off by her dysfunctional mother (Huffman) to spend the summer with her grandmother (Fonda)” and blah, blah. So Lohan’s obviously staying in character off the set.
Robinson tells Lohan that “you’re well aware that your ongoing all night heavy partying is the real reason for your so-called ‘exhaustion’” and that Morgan Creek henceforth refuses to “accept bogus excuses for your behavior.” He warns that Lohan will be held “personally accountable” for losses caused by her actions. He claims that Lohan’s behavior has already “resulted in hundreds of thousands of dollars in damage” and that Morgan Creek may sue her unless she straightens up and flies right. “I urge you to take this letter seriously and conduct yourself professionally,” Robinson concludes.