I was so backlogged by Friday midnight that I decided not to return to Comic-Con today (i.e., Saturday, 7.22). No offense but I was fairly okay with that. I heard a little voice late last night that said “fug it.” It’s a cool thing to be a Comic-Conner but after wandering around the San Diego Convention Center and sitting for several hours inside the cavernous Hall H, you start to feel like a stooge sitting there with 5000 others, watching show after show on the big screens and absorbing the big-studio sell-jobs.
In any case Friday’s action — a special screening of Darren Aronofsky’s The Fountain, the raucous Snakes on a Plane presentation, the colleague buzz that followed the promo for Alfonso Cuaron’s Children of Men — was enough to fill the tank. 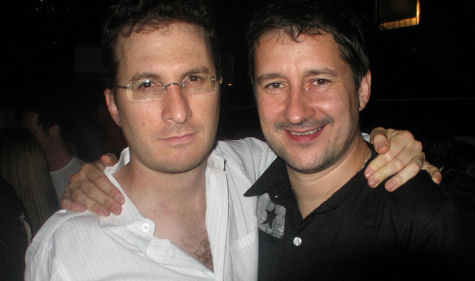 The Snakes presentation was a lot of fun for everyone, but for me it was also a bit of a downer — a final official confirmation that Snakes on a Plane isn’t going to be anything like Tremors (i.e., a smart, crafty comic thriller), and possibly more like a cheeseball B-movie with special effects out of the mid ’90s, and enhanced by the reverse Midas touch of a go-along, second-tier director.
Aronofsky’s The Fountain (Warner Bros., 10.13), which I saw with about 20 other journalists last night in a plex on 5th Street, is the most beautiful and best-cafted cosmic head-trip movie since I don’t know what. 2001: A Space Odyssey? Fight Club? The first half of Altered States ? (I was never a big fan of Bertolucci’s Little Buddha. Was anyone?)
< ?php include ('/home/hollyw9/public_html/wired'); ?>
And for a movie with Hugh Jackman and Rachel Weisz playing three characters each in three different eras (the 1500s, the present and the 24th Century), it’s remarkably easy to sort through and make sense of. You have to let it seep into you like any great book or perfectly brewed cup of tea, and you have to seep yourself into it also, but it’s an extraordinary place to go to and then return from….like a planet unto itself.
It’s one of those films that takes a little seasoning to appreciate. Mature educated types will like it more than typical 20-something hormonals, women probably more than guys who watch football and smoke cigars and drive SUVs, etc.
I’m presuming that anyone who’s ever tripped on anything will definitely respond to The Fountain. (Most columnist-critics are afraid to admit they’re “experienced”, but a lot of people of character and conviction dropped in the old days). This means, I guess, that at least part of the marketing effort will have to be directed at boomers who’ve been around that particular block. 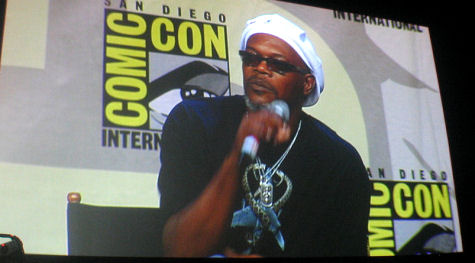 Samuel L. Jackson during yesterday’s Snakes on a Plane presentation at Hall H

But a good nutritious film is a good nutritious film, and The Fountain is tight and rich and well-crafted enough that it will play just as well ten or fifty years from now.
I guess you could call it an odyssey. It’s about parallels, echoes and refrains between Jackman and Weisz’s three characters over a thousand-year time-span. The three settings are 16th century Spain, here-and-now America and somewhere in the nether cosmic regions some 500 years from now. It’s a movie about healing, loving…trying to break through.
The Fountain will play at both the Venice and Toronto Film Festivals in early September. I’ll get into it more sometime around then.
I don’t know where I was when the presentation for Children of Men (Universal, 9.26) happened, but one look at the trailer tells you it’s a gripping futuristic thriller and a class act that steers clear of generic Comic-Con elements — i.e., mythical terrain, geek wonder, visually driven, monsters and mutants, etc.
On top of which it’s got Cuaron (Y Tu Mama Tambien, Harry Potter and the Prisoner of Azkaban) co-writing a script with Timothy Sexton (Live from Baghdad) and with Clive Owen, Julianna Moore and a hippie-haired, pot-smoking Michael Caine costarring. You can feel the focus and and smell the pedigree. 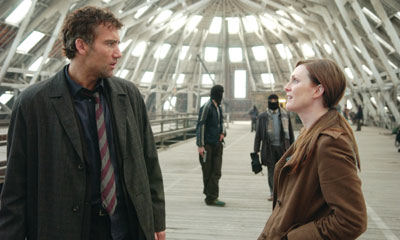 Set in Britain a few decades hence, it’s about mankind facing extinction and anarchy because of an infertility defect that has spread across the globe. Cuaron was quoted as calling it “the anti-Blade Runner.” I’m guessing that Children will be shown at the Toronto Film Festival and that screenings starting next month in Los Angeles are also likely. The great Guillermo Del Toro (Pan’s Labyrinth) Interviewed Cuaron during the presentation.
I don’t know how I managed to avoid thinking about Child of Men until yesterday, but I’m all over it now.
The Warner Bros. presentation include a briefing onThe Reaping, which looks like The Birds by way of The Swarm except it’s about locusts and (I presume) frogs and other Biblical plagues visited upon a small southern town. The director is Stephen Hopkins, a moderately talented, very friendly Britisher (The Life and Death of Peter Sellers) whose involvement in a film of this sort means….competency.
Problem is, I’m having trouble remembering the title. The Reaping, The Gleaming, The Shining, The Reaming, The House-Cleaning…hard to hang onto.
Next on the bill was Superman Returns director Bryan Singer, who told the crowd he intends to shoot a Supie sequel for 2009, and that he hopes to “go all Wrath of Khan on it.” After a while Singer brought on Richard Donner, director of the original ’78 Superman with Chris Reeve. Donner was there to plug a new Superman II DVD. He showed a cool Superman-deceives-Lois scene from that film that was never used in the film. The disc will also include footage of Reeve doing screen tests. 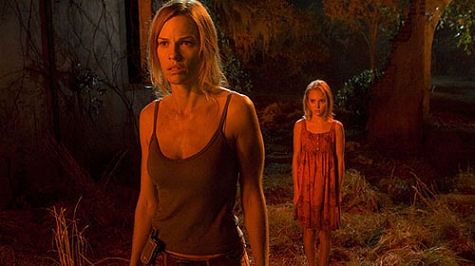 The best thing shown the whole day was Singer’s Superman Returns blooper reel. It’s hilarious. He only cut it together a day earlier, I was told. Singer should definitely put this on the DVD.
The second funniest thing happened when Singer was asked about the selling if Superman Returns. “I can’t talk about the marketing,” he almost whispered…but it was clear he wasn’t delighted with what happened. His hints, implications and half-utterances on this subject were priceless.
I can’t talk about 20th Century Fox’s Eragon because it struck me as another mythical CG battle flick in the crusty mold of Joseph Campbell, Lord of the Rings, Dragonslayer and Star Wars. Same deal with Pathfinder. Reno 911….low-rent but a lot of people will have fun with it. Borat ….same.
A unseen sequence from Peter Jackson’s King Kong Deluxe Extended DVD was shown on the big screens. It’s a re-do of the scene from the ’33 original with crew making their way across a swamp on a raft. It was “fun” to watch and yet it was typical Jackson crap — vigorous and inventive, overwrought, show-offy. The guys are attacked by a huge eel-like monster with big yellow teeth, and Jackson has his creature swim all kinds of wow stunts like he’s a dolphin at Sea World. 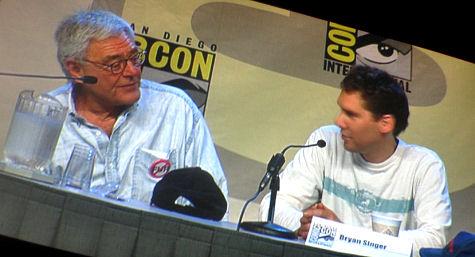 Neil Labute talked about The Wicker Man (Warner Bros., 9.1) a bit, and then showed a scene from the opening of the film. Nic Cage is a motorcycle cop pulling over a young mother because her daughter has thrown a doll out in the road. The scene starts to get creepy, and then creeper still…and then shocking, and then demonic. It left me with a feeling that The Wicker Man is going to be a very scary film. Labute is one of the brightest directors around, but I wouldn’t call him warm and fuzzy. And you need a little touch of steel in your soul, I think, to push the right buttons and do the job on people.
Comic-Con is the ultimate cinegeek get-together. I love being surrounded by thousands and thousands of mellow eccentrics. Spiritually-speaking, the vibe is very cool…serene, even. But nobody looks like they work out much or eat a lot of healthy food. There were always a good amount of smokers outside. Four or five people suggested to me that Comic-Con was about movies and mythology but also drinking. Lots of that.
San Diego’s Gaslamp district has the usual-usual tourist stuff (cool restaurants, lotsa bars, pretty women), but I wish have liked to visit here during Wyatt Earp’s day. Which was one reason it feels better to just chill and work on the column today in air-conditioned comfort. I’m sitting in a guest cabin this afternoon in Escondido (about 30 miles north of San Diego), and it’s the Nefud desert out there.