Since running the Reign O’er Me piece last night and particuarly that top photo of Don Cheadle and Adam Sandler in a vinyl record store, a lot of guys have written in about Sandler’s resemblance in this photo to Bob Dylan during his Blonde on Blonde period. The more general response is simply that the Dylan coif looks cool. 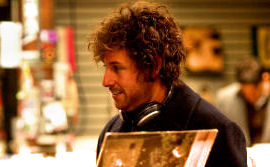 One guy wrote, “Wow, I can’t believe how much better Sandler looks with long hair. Why does he always crop his hair so short that his head looks like an egg with a nose?” (I myself liked Sandler’s shaggy Wedding Singer look way back when, and was kind of dismayed when he shifted over to shorter hair after that.) The obvious thing to take from all this is that Sandler — hello? — would make a great Dylan in Todd Hayne‘s I’m Not There. Which I don’t think is fully cast yet.