Todd McCarthy‘s review of Woody Allen‘s Scoop (Focus Features, 8.28) in the 7.16 Variety won’t be lifting anyone’s spirits over at Focus. (Kirk Honeycutt‘s Hollywood Reporter review is a little kinder.)
This McCarthy passage stands out: “Sadly, Allen’s patented harangues and complaints have rarely been more irritating, not only because they sound like barely revised versions of those we’ve heard many times before, but because his broad accent and uncouth manner stand out so conspicuously amid so many well-spoken British thesps. 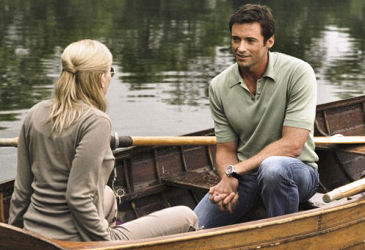 “Asked with some bemusement by some stiff old Brits about his background, Sid replies, ‘I was born into the Hebrew persuasion, but when I got older I converted to narcissism.’ And yet Allen’s appearance in Scoop belies this: “Looking significantly older than when he last appeared onscreen (in Anything Else three years back), Allen comes off as a disagreeably disgruntled curmudgeon whose wit has curdled.”