Quote #1: ”What’s unique about Snakes is that the idea of the movie has excited people…but that doesn’t necessarily have anything to do with the movie we made. I’m hoping it does. But I just don’t know what people are expecting.” — New Line Cinema president Toby Emmerich tells Entertainment Weekly‘s Jeff Jensen in the 8.4 issue. 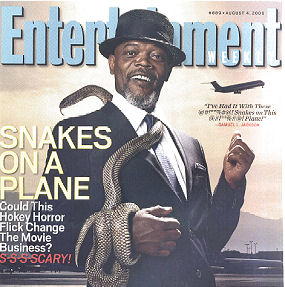 Quote #2: “The hepcats loved the title and had fun with it, but they never realized (or wanted to realize) what kind of film Snakes on a Plane actually was all along. And I include myself in that equation.” — from last Sunday’s (7.23) post-Comic-Con HE feature called “The Fun’s Over.”
Quote #3: “If the movie doesn’t deliver the goods, word-of-mouth will devastate the movie quicker than any bad review could” — Houston critic Joe Leydon to BCC News’ Peter Bowes in 7.28 piece.
Quote #4: “The impression I got from the short reel on Friday [at Comic-Con] is that Snakes on a Plane is maybe one-tenth as hip as the Snakes riffs we’ve all enjoyed the last three or four months on www.snakesonablog.com….if that.” — also from HE’s 7.23 article.
Quote #5: ”Honestly, I think we were worried about the same things other people were worried about. Could you take a movie called Snakes on a Plane seriously?’ It took us some time to catch up with it.” — New Line domestic marketing chief Russell Schwartz to Jensen in EW piece.
Quote #6: “The best part of Snakes on a Plane happened online in March and April. The movie couldn’t possibly live up to the hip hype, and now we’re all starting to get the idea that it indeed hasn’t. Reality has set in, o my brothers. The Snakes team and the New Line ‘creatives’ have been playing catch-up and ‘hey, can we get in on this thing?’ all along. Welcome to the world of 116 No. Robertson Blvd.” — HE 7.23 piece.