M. Night Shyamalan’s Lady in the Water (Warner Bros., 7.21) is some kind of disaster — fanciful, leaden, disconnected. But underneath all the preciousness lies an egoistic obstinacy that I found strangely touching. Night wants so much to make something loving and penetrating and out-there brave, and the failure of the thing to even ignite, much less lift off the runaway, almost breaks your heart. Almost.
Lady has a good thing going inside of it — a notion that average neurotics who lead inconsequential lives inside big apartment buildings can be selfless, gallant and resourceful — but the fairy-tale plot feels cockamamie and pasted together, and the dialogue just kinda goes plunk. I wanted it to work, but M. Night just isn’t a good- enough writer. Good screenplays never feel turgid and labored-over, and I’ve written enough shitty stuff to know what I’m talking about. And I’m sorry. Because I admire what Night’s trying to do. 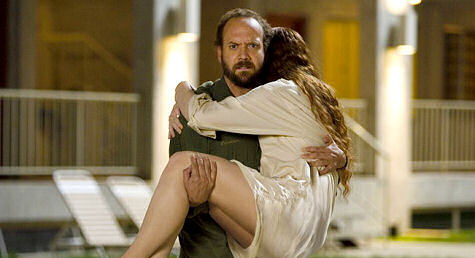 And yet I didn’t much care for his coverage-restricting approach (only one camera angle per scene), which seems to emphasize rather than obscure Lady‘s script problems. And I was even bothered at times by Chris Doyle’s cinematography, which seems eccentric (occasional non-focused shots, pointlessly “off” framing) in a kind of hip sell-job way so everyone will know what a brilliant dp Doyle is.
But we need to stop for a second and acknowledge that there’s one third-act riff by Bob Balaban that’s very good. He plays a smug, priggish film critic named Farber, and I I loved it when he tries to use cliched assumptions to fortify himself in an uh-oh situation. It’s basically Night swiping at people like me, and saying “take the Pepsi Challenge and tell me who’s got a bigger, braver heart — guys like you or me?” The Farber scene is take-you-out-of-the-movie funny, yes, but at least it’s that.
< ?php include ('/home/hollyw9/public_html/wired'); ?>
I tried three times to write a pan of Lady in the Water but it wouldn’t come. That’s because I’m torn. I admire Shyamalan for trying to do something really different by standing up on the balcony railing and balancing himself in front of millions. And I feel sorry for him getting pasted left and right for not only the failings of the film but also for Michael Bamberger’s The Man Who Heard Voices, which Janet Maslin has called a puff piece but I feel is one of the nerviest tell-all books about the making of a film ever written.
But I also feel that Night has become arrogant and removed and that he needs to reshuffle the deck and start over.
Most people brave enough to see this film are probably going to lose patience with it early on, as I did. And then, I imagine, they’re going to start hating it. Or falling for it like an obsessive, with the same kind of determination that Night had all through the writing and the shooting. The story doesn’t work, but if you look at it like something that isn’t supposed to “work” but weave a spell and take you someplace new and trippy, you might be okay with it. 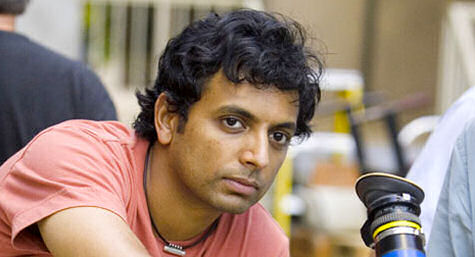 Either you’re the kind of viewer who finds it somehow enchanting when Paul Giamatti’s character, an apartment building superintendent named Cleveland Heep, drinks a glass of milk and gets some of it on his moustache and doesn’t wipe it off…or you’re the kind of viewer, like me, who says, “Okay, I get it…a milk-soaked moustache and he doesn’t care…a character bit…Heep is dreaming, irrational in a good way…but how many scenes are we going to have to look at this milky moldy growth on his upper lip? Wash it off, please!”
Lady is a fable about some lost people waking up and touching something vital and transforming. If you can’t go with the bedtime story-ness of it, it won’t work…it can’t work.
I know this: any filmmaker who tries to explain an arcane mythology in the very beginning of his film with animation is in trouble right from the start. Night is saying to us, I tried to make my story work on its own simple terms, but the test scores showed people are confused so I’ve stuck this in to help you understand and get into the mood.
Everyone in Heep’s apartment complex, located somewhere in the Philadelphia suburbs, is some kind of fuzzy eccentric. There’s a tall chatty Korean girl (Cindy Cheung) and her mother, a guy (Bill Irwin) who sits in front of the tube 24-7, a one-sided bodybuilder (Freddy Rodriguez), a guy trying to write a big novel (Shyamalan) while living with his sister (Sarita Choudhury), a group of guys whose lives are about cigarettes and pot), a gentle guy (Jeffrey Wright) and an older woman whose face I half-recognized until I realized….wow, it’s Mary Beth Hurt! 24 years ago she was blowing that young guy in the family station wagon in The World According to Garp …what happened? 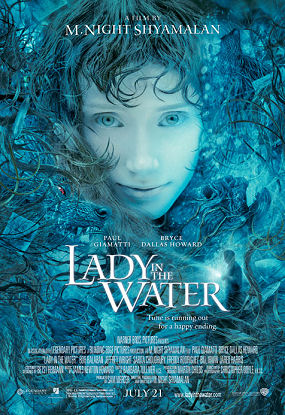 Heep is your basic homely lonely guy with a heart — standard Giamatti stuff. And he comes alive when he meets Story (Bryce Dallas Howard), a “narf” who’s been living somewhere under the swimming pool. A narf is a kind of muse — a female life form whose task is to move people to accomplish something great. She’s also trying to return home like E.T., and her big bugaboo is something called a “scrunt” — a big snarly CG wolf with grass instead of fur.
She can be saved, however, by a guardian…only it’s guessing game as to which person in the building will fill this role. Others will help her also — a group called a “guild”, a “symbolist”, a “healer” — but who are they? If Story fulfills her mission or is saved or whatever she’ll be carried off by a giant eagle unless something called the “tartutic” stops her…wait a minute, I can’t remember what this is or was.
My memory is definitely going, Dave. I can feel it. I’m afraid.
Most of the film is about Giamatti putting together the right answers and piecing together the snarf-vs-scrunt-vs.-tartutic legend as everyone bands together to save Story and their lives in the bargain. Fuck all this, I said after an hour or so. I might have felt more supportive if, say, Bob Balaban’s film critic had turned out to be the guardian. But of course, Shyamalan has put “Farber” into Lady so he can show us what clowns and losers critics are, and that cynical know-it-alls know nothing. He may be right, but I had more fun with Balaban than any other actor or element.
I love this passage from Michael Atkinson’s Village Voice review: “The film often has the driving tension of a paranoid psychotic, desperately trying to figure out the absolutely nonsensical. This isn’t magical realism, it’s pure magical thinking — Shyamalan is mystically assuming that any idea or image that pops into his skull will make a shapely tale, no matter how much cock-and-bull logic he has to invent to Gorilla Glue it together.” 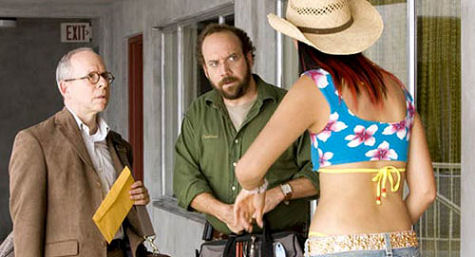 But there’s something about the goofball tone of this film that I half-liked. Not the puzzle parts or the people finding their purpose in life parts, but…well, the feelings of togetherness and community. That sounds sappy, I realize, but people need to pool their resources to save narfs and beat back the scrunts. Or at least, the people in my building do.
There will be some who will be appalled at Night’s visionary obnoxiousness in this film. I can’t argue with anyone calling this his worst movie ever — it obviously is — or maybe one of the most embarassingly “off” studio-produced films ever made.
There will be others, I’m guessing, who will be taken with it. Maybe it’ll find a family audience…people taking their kids. I think it’s too complex to appeal to eight year-olds but maybe not. And there will be others, like me, who will feel this way and that way — mostly not liking it, feeling frustrated for the most part, sometimes getting angry with it, but at the same time going, “Gee, this is too bad….if only it had worked.”
Night has to forget about writing and just be a director for the next couple of films. That’s all there it to it. He needs to make another Signs, or even make something for a big studio that isn’t about faith or spirituality or any kind of strangeness. And after he’s paid his dues and made up for Lady in the Water (a task that will take at least four or five years), he can go back to writing again. But I would honestly advise against this.