Jonathan Dayton and Valerie Faris’ Little Miss Sunshine (Fox Searchlight, 7.26) is, at the very least, this year’s Sideways — a non-formulaic character-driven comedy created by people of similar attitude and talent and emotional complexity levels, with laughs are just as rich and uproarious and particular.
There are two big differences: (1) Sunshine is a family comedy — a real family comedy about real people, as opposed to a piece of shite like Cheaper by the Dozen — and not about screwed-up middle-aged guys, and (2) it may make a lot more money than Sideways. 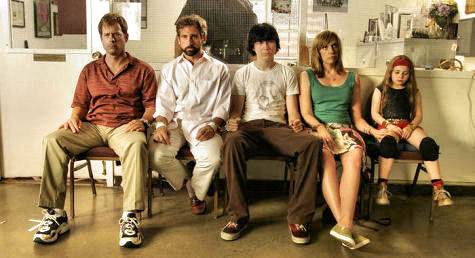 Or so it would seem to judge by what happened last night, when the L.A. Film Festival ended with a Sunshine screening at the Wadsworth. The place shook like the Eccles theatre did last January before a hopped-up crowd at the start of the Sundance Film Festival. I’m talking guffaws, laughs, horse laughs and one signi- ficant “awww.” Plus heavy cheering and clapping and woo-woo’s as it ended.
The amazing thing for me is that Sunshine goes into some very dark places at times, and yet it has the balls and the spirit to bounce right out of those places and make you laugh five or ten minutes later, like nothing happened.
< ?php include ('/home/hollyw9/public_html/wired'); ?>
Watch both cuts of the trailer — the one on the Sunshine website and the one currently parked on Rotten Tomatoes — and you’ll have some idea of what I’m talking about.
It played just as well last night with me also — no diminishment at all. I can see catching it at least another couple of times and then owning the DVD.
I don’t know how big or how wide, but Sunshine is definitely a hit waiting to happen. It looks to me like a winner with all four quadrants. It may be a bit soft with young males at first, possibly, but that shouldn’t last. 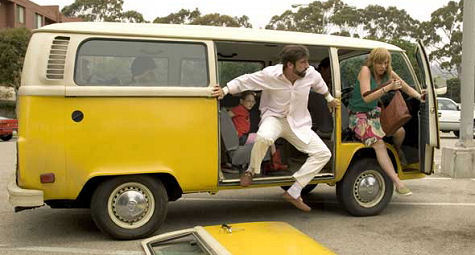 The only people who may not warm to this acidly funny and touching family comedy as much, possibly, are the hideous fastidious mothers out there who delight in transforming their daughters into Jon Benet Ramsey clones so they can win at junior-miss beauty pageants.
After you see Sunshine you’ll know what I’m talking about. These women — the whole junior-miss beauty pagent culture, in fact — should be quietly rounded up and put on Army transport jets and flown to rural China and put to work on farming communes.
It’s also starting to hit me that Sunshine has a real shot at picking up some critics awards and Oscar nominations — Dayton and Faris for directing, Steve Carell and especially Paul Dano for Best Supporting Actor (the latter’s performance is especially good because two-thirds of it is done non-verbally, and yet he hits it out of the park with every facial muscle inflection and eye-roll), Michael Arndt for Best Screenplay, and so on.
I just re-read my morning-after review of Sunshine that ran six months ago, so here it is again (most of it) and screw the quote marks:
Little Miss Sunshine doesn’t exactly re-invent the wheel. It’s just a smart family comedy-slash-road movie, but the last film that got so much good humor out of such dark subject matter was maybe David O. Russell’s Flirting with Disaster, although Sunshine is a bit more of a wholesome, straight-up thing. 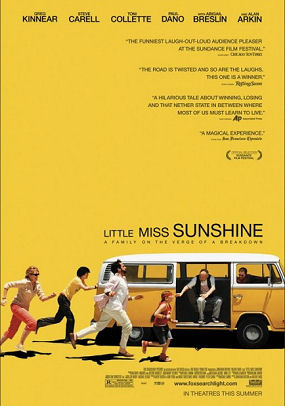 This is a film about hostility, feelings of futility, middle-aged career collapse, a troubled marriage, a fiercely alienated son, a dad who’s a bit of an asshole, a sudden family death, a failed suicide…and it’s often very funny and quite warm and so cleverly calculated and well-blended that it doesn’t feel like anyone calculated anything.
Sundance director Geoff Gilmore wrote last January that Little Miss Sunshine possesses a kind of “Capra-esque lunacy.” For me the word Capra (as in Frank) means cornball emotion and cloying stabs at manipulation…and Sunshine feels, to me, more natural (and naturally effective) than any Capra film I’ve ever seen.
And damned if Steve Carell isn’t eight times sadder and gloomier in this thing than he was in the early portions of The 40 Year-Old Virgin, and if he isn’t much funnier and more winning here than he was in that hit film from last summer. It’s his best performance ever, no question.
Virgin director-writer Judd Apatow has been writing comedy for 15 years or so, and when he sees Little Miss Sunshine he’s going to wish he could write something as good as what Michael Arndt has done, and direct a comedy of this type with this kind of naturalistic panache. 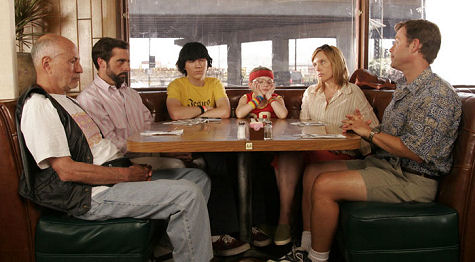 Sunshine is basically about family ties holding strong under ghastly and horrific circumstances.
It’s two days or so in the life of the can’t-catch-a-break Hoover clan — the vaguely dipshitty motivational speaker Richard (Gregg Kinnear), his sorely frustrated wife Sheryl (Toni Collette), Sheryl’s crushed, post-suicidal brother (Carell), a curmud- geonly, drug-taking grandpa (Alan Arkin), the silent, sulking Dwayne (Paul Dano), and 7 year-old cutie-pie Olive (Abigail Breslin).
The action is about going on a car trip from hell to take Olive to a Little Miss Sun- shine beauty pageant in Redondo Beach…and wouldn’t you just know the pageant itself would also be a nightmare? But this family has an improvised cure for that.
It’s not just that this all feels unexpectedly funny, but fresh and unforced. So much so that it’s easy to ignore a couple of scenes that don’t entirely work. It’s not quite as refined or soulful as Alexander Payne’s Sideways, but Sunshine has to be a hit — it can’t not be.