The hottest picture on the tracking list right now is Will Ferrell‘s Talledega Nights: The Ballad of Ricky Bobby (Columbia, 8.4), which you and I know is going to be a dumb-ass redneck comedy pretending to be a satire of dumb-assed redneck car culture. We also know that fast-car movies are basically about old-boy nostalgia and the days when you could peel out and wail without worryin’ about nothin’, man. But times have changed, Jethro…sorry. 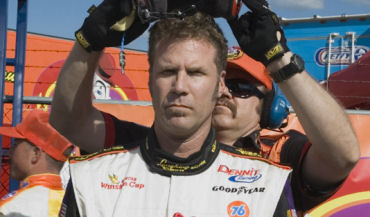 This is going to make me sound like a humorless liberal, but as funny as it may turn out to be (and I realize Ferrell and Adam McKay are going to mock red-staters and their values with this film) Talledega Nights will also be serving as a kind of yeehaw comfort-zone movie in spite of itself. A comfort zone for everyone who’s in denial about global warming and who refuses to see An Inconvenient Truth…a movie for all the ecological neanderthals to rally around and relax and rib each other about.
Friggin’ Ferrell, man…funny guy…vroom! vroom!…fill the friggin’ atmosphere with greenhouse gases….pass me another tasty groundup-pig-intestine hot dog…slurp down another frosty…yeahhhh!
Talledega has a 39 % definite interest and that’s from a phone survey of largely urban movieogers. I’m saying that the surveyors aren’t talking to people in the backwater shitkicker regions, which is where a lot of the business for this film is going to come from, so it’s going to be even bigger. I’ve been told (and I would naturally assume) that a lot of the Talledega ad money is being spent on this demo. As anyone would..c’mon. The ad people aren’t stupid.
Otherwise there’s a good amount of interest in World Trade Center (Paramount, 8.9) but there are stumbling blocks — Nic Cage isn’t a star, the 9/11 backdrop is a mixed bag with general audiences, and Oliver Stone doesn’t sell tickets like he used to between the late ’80s and the mid ’90s.
Miami Vice is going to do what it’s going to do, but I’m getting the idea that it’ll be a push to make $20 million this weekend. I hope I’m wrong, but the phrases I’m hearing are “soft landing” and “pissing upstream.”