[Before reading this article, click on this mp3 file — the song you’ll hear fits the mood of what’s being said.]
For yours truly, the helium began to leak out of the Snakes on a Plane balloon when it was announced last Tuesday that New Line had decided not to advance- screen it for critics. That was a big uh-oh for those who knew the code. Then came last Friday afternoon’s Snakes presentation at Comic-Con, and that was it. End of story, case closed, unplug the phones. 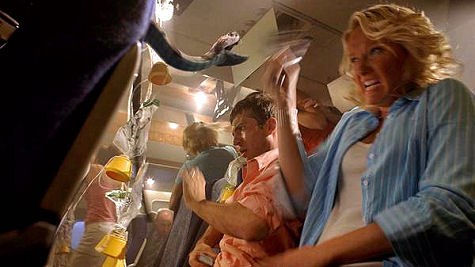 Judging by the eight or nine-minute reel I saw in Hall H, Snakes on a Plane is going to be a wackazoid cheeseball thriller for the pseudo-hippers. But not that much fun for people like me.
The reel seemed to promise a film that will be energetic and kick-assy and will almost certainly do the old New Line exploitation bootie-shake from start to finish. But it also had some fake-snake CG that seemed to be generated by FX software created in 1997. And of course the snakes are lethal killing machines that actually go “hssss!” like a pissed-off audience sitting in a movie theatre. And some of the big snakes, like Spielberg’s Jaws shark, rumble and growl like lions on the plains of Kenya. And some of the animatronic snake models don’t look right.
< ?php include ('/home/hollyw9/public_html/wired'); ?>
The reel promised a lot of screaming and sweating and some great snake-kill moments, but the cutting didn’t seem all that great. (It seemed to me that a bit with Samuel L. Jackson slipping into the pilot’s seat and trying to bring the plane out of a steep dive — a standard plane-thriller gambit — was handled pretty sloppily.)
And it had at least one instance of shamelessly bad dialogue when Jackson says to a senior stewardess when things get rough, “I need you to be strong for me.” A guy I talked to later on tried to dismiss this as part of the joke that I’m incapable of getting because of my own problems, not the movie’s. If I had a sense of humor I would relish the fact that Snakes on a Plane is a genre parody, he meant. So SoP is Airplane now? I think not. Some dialogue isn’t awful enough to be funny — it just goes thud. 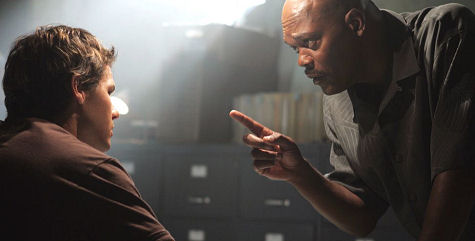 But the hoo-hah demeanor projected by Snakes director David R. Ellis is what really did it. 45 seconds after he walked out on-stage and started talking about the film, alarm bells were racketing in my head. A former stunt man, actor and 2nd A.D., Ellis reminds me of a hundred below-the-line guys I’ve met in this town over the last 20-odd years…an amiable go-alonger with a good sense of humor and a lot of friends….a guy who walks around in shorts and sandals and who likes to chill in the backyard on weekends with burgers on the barbie and a can of beer in his hand.
Don’t get me wrong. Snakes will be “fun” if you go with the right downmarket attitude. It’s a safe bet it’ll clean up when it opens on 8.18 (the guessers are talking a first-weekend tally in the mid to high 20s), and I’ve been told it has at least three or four “nooo!” scenes that fans are going to howl at as they text-message their friends and spread the word. If this happens it’ll probably translate into decent repeat business.
But the X-factor, smart-guy audience that had been primed and ready to enjoy this comic horror-thriller since the Snakes internet movement began last March has been jettisoned. Jettisoned back when the film was made, I mean. The hepcats loved the title and had fun with it, but they never realized (or wanted to realize) what kind of film Snakes on a Plane actually was all along. And I include myself in that equation.
The impression I got from the short reel on Friday is that Snakes on a Plane is maybe one-tenth as hip as the Snakes riffs we’ve all enjoyed the last three or four months on www.snakesonablog.com….if that. 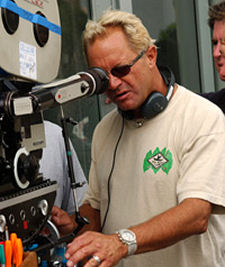 I said it a long time ago, but the best part of Snakes on a Plane happened online in March and April. The movie couldn’t possibly live up to all the hype, and now we’re all starting to get the idea that it indeed hasn’t. Reality has set in, o my brothers. Welcome to the world of 116 No. Robertson Blvd.
Jackson,who was fantastic last Friday on the Hall H stage, said at one point that he loved what had happened with the internet Snakes frenzy, and that he’s looking forward to a day when interactive fans will create plot points for a new film — that the fans will one day become the new auteurs. In fact the fans were the auteurs with the Snakes on a Plane phenomenon. They ran the show. The Snakes team and the New Line “creatives” have been playing catch-up and “hey, can we get in on this thing?” all along.
Who knows what the three Snakes screenwriters — John Heffernan, Sebastian Gutierrez, David Dalessandro — had in mind in the early stages, but I know the Snakes footage I saw on Friday and the what-the-hell, pocket-the-paycheck attitude I picked up from David R. Ellis are one and the same.
The New Line powers-that-be have basically said, retroactively, “Uhh, thanks for the internet word-of-mouth guys. We all had some fun with those clever videos and songs and posters you came up with…really loved it. But that was you, not us. Thanks for thinking it might be and for helping us make millions, and…well, try not to blame us for not being on your wavelength.” 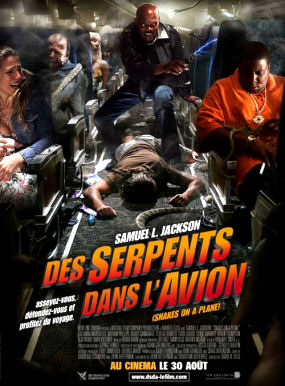 I guess I basically drove all the way down to San Diego last Thursday to have my concerns about Snakes on a Plane confirmed, and now they have been.
I’m sure New Line publicity would like me to be strong for them. Do the dance, hold the line and wait until the movie opens on Friday, 8.18. But they showed the footage at Comic-Con and brought Ellis up on the stage, and I think it’s fair to air my impressions of that.
It just hit me I may be helping the cause with this piece. Critics and media people who haven’t thought much about SoP may read it and go “stupid piece of shit” and write it off, and then they’ll pay to see it in theatres at those 10 pm shows on Thursday , 8.17 and — who knows? — maybe it’ll be a lot more entertaining than what the Comic-Con footage reel indicated and they’ll write good reviews and spread the word.
It’s always better to see a film with low expectations (or no expectations) than high ones. Any distribution exec will tell you this, including the ones at New Line.