What’s with the Hispanic heritage of the four top-billed stars of Asylum’s Snakes on a Train — Alby Castro, Ryanne Ruiz, Giovanni Bejarano and Al Galvez? Obviously Asylum’s looking to steal some of the heat from New Line’s Snakes on a Plane (8.18) by releasing their straight-to- video knockoff three days earlier (Tuesday, 8.15). But any cheapo outfit making a ripoff DVD knows that spreading around the ethnicity of the lead actors — a couple of Anglo leads with one or two African-American and Hispanic actors rounding things out — broadens the commercial appeal. 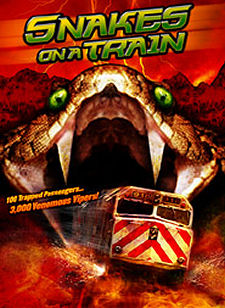 The reason for director Peter Mervis ‘s decision to cast four Latino leads is all about the Snakes on a Train milieu — a Mexican train headed for the U.S. Eric Forsberg‘s screenplay is about a Mexican woman coping with “a powerful Mayan curse” that has caused little snakes to be hatched inside her (“slowly devouring her from within”), and so she takes a train heading for “the border” and into Los Angeles to get the help of a shaman who will provide an antidote. Except the snakes — flesh-eating-vipers — somehow crawl out of her and start terrorizing the passengers.
The problem is that the copy on the poster says “100 trapped passengers — 3,000 venomous vipers.” (Wait a minute….is it 2000 or 3000? The copy is too blurry to read.) One little Mexican woman has 3000 worm-sized snakes inside her, and then they instantly hatch and grow into full-sized fearsome creatures once they’ve slithered out of the womb-like body? Even a ludicrous tongue-in-cheek monster movie (my all-time favorite is Tremors ) has to make some kind of stupid sense.
Mervis’s last Asylum knockoff was The DaVinci Treasure, which apparently opened in theatres last May on the heels of The DaVinci Code. It starred C. Thomas Howell, Lance Henriksen and Nicole Sherwin. A IMDB poster from Israel named “ruberoid-tk” called it “the most cheap, cheesy and useless movie [of the] last decade.”