In the late ’90s director Jonathan Kaufer (Bad Manners) used to invite pallies and media allies to occasional DVD parties, at which everyone would decide which cool DVD to watch (films by Bresson or Antonioni or Wilder never seemed to make the cut) while sipping good wine and eating delicious Chinese take-out food.
The parties happened at a big McMansion on Summit Drive in the gated Beverly Park community which Kaufer was sharing with then-wife Pia Zadora and their children, and in going to these parties I got to know their swanky neighborhood a bit. It’s very soothing to bask in the aura of great wealth, but Beverly Park feels a little bit like something built for Disney World in Orlando — “Ostentatious- Rich-People-Who-Don’t-Quite-Get-It Land.” Flamboyant and luxurious and well- tended, but with a declasse faux quality everywhere you turned. 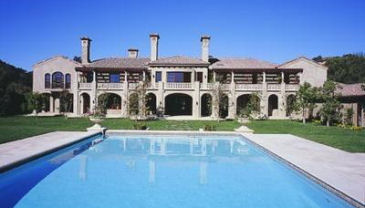 All to say this N.Y. Times Sharon Waxman piece about the residents of Beverly Park struck me as hilarious. The funniest part describes how some residents decided to get in the face of their neighbors Jeanette and Robert Bisno (who live next door to Pheonix Pictures honcho Mike Medavoy and his wife Irena) for essentially degrading the neighborhood with their appalling lack of taste (“Vegas”- style gates, a dinosaur topiary viewable from the street, “an eight-foot abstract sculpture in their front courtyard of what some interpret to be a woman on her back with her legs in the air“).
I was attacked last year when I wrote that aesthetic choices made by people whose last names end in vowels could rarely be trusted, but sometimes the proof is in the pudding. You can’t instill good taste in people. Taste is a result of a thousand distastes, and either you’ve been around and seen the world and developed a sense of some refinement and a respect for venerated aesthetic traditions…or you haven’t.
Zadora and Kaufer’s home, by the way, was built on land where Pickfair, the celebrated Spanish-style home of Douglas Fairbanks and Mary Pickford, once stood. Zadora and her former husband Meshulam Riklis bought Pickfair in 1988 and destroyed it soon after to make way for their McManse.