Director-writer Neil Labute talked about The Wicker Man (Warner Bros., 9.1) at Comic Con last weekend, and also showed a scene from the opening of the film. Nic Cage is a motorcycle cop pulling over a young mother because her daughter has thrown a doll out in the road. The scene starts to get creepy, and then creeper still…and then shocking, and then demonic. 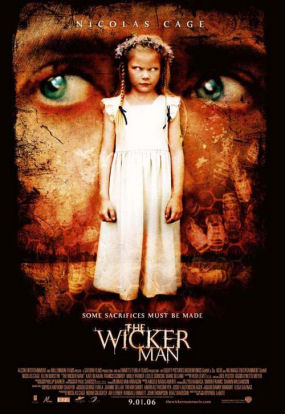 The Wicker Man trailer is even creepier. They’ve both left me with a feeling that it’s going to be a very unnerving, very scary film . Labute is one of the brightest directors around, but I wouldn’t call him warm and fuzzy. And you need a little touch of steel in your soul, I think, to push the right buttons and do the job on people. Labute acknowledged last weekend that the subject, deep down, has something to do with his feelings about women.