I’ve given Michael Winterbottom several chances over the past ten years and I’ve never been that happy with anything he’s done…not really. I’ve therefore regrettably decided he’s the wrong guy to direct Angelina Jolie in that just-announced flick about the life and death of Wall Street Journal reporter Daniel Pearl,who was kidnapped and then beheaded in Karachi, Pakistan, in early 2002. 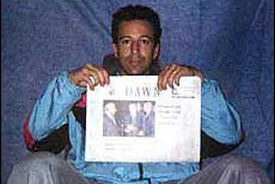 Winterbottom’s film will be an adaptation of a book by Pearl’s widow, Mariane Pearl (whom Jolie will potray) called “A Mighty Heart: The Brave Life and Death of My Husband Danny Pearl.” Brad Pitt will produce with Dede Gardner of Plan B and Andrew Eaton of Revolution Films.
I’ve been told by the Ivory Tower /Planet Zircon crowd that not liking Winterbottom’s Tristram Shandy: A Cock and Bull Story isn’t an option; I’m sorry but I found it passable at best, and finally tiresome. The Road to Guantanamo has parts that don’t ring true, and it’s one of those critically-hailed films that are less and less admirable the more you think about them. I found it infuriating that Winterbottom didn’t seem to want to know why those three guys decided to travel to Afghanistan right after 9/11 — it’s one of the all-time dumbest travel decisions ever made by anyone, ever. I was okay with 25 Hour Party People but I loathed 9 Songs and wasn’t that high on Code 46.
Winterbottom knows his way around and has sold the industry on his indie-political British down-and-dirty cred, but I’ve come to be convinced he’s not especially gifted. He won’t make a bad film of the Pearl book, but I swear to God and I’ll bet my life insurance he won’t make a great one or even an especially stirring one. It’ll just be good, not bad, an agreeable shoulder-shrugger, etc. At his very best, when he’s peaking, that’s the kind of film that Winterbottom makes, I know what I’m talking about. It’s probably too late for Pitt, Gardner and/or Eaton to somehow queer the Winterbottom deal, but maybe it isn’t.