We all need to bow our heads and observe a moment of silence for the dear & departed title of Clint Eastwood‘s second Iwo Jima movie, which up until recently was called Red Sun, Black Sand. It now has a much blander title — Letters from Iwo Jima.
The title change is revealed on page 64 of this week’s Entertainment Weekly (a “Fall Movie Preview” issue with Daniel Craig on the cover), and was confirmed this morning by a Paramount staff publicist. 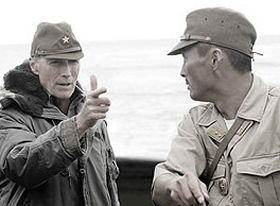 The original title had a poetic tint with allusions to the flag of Japan and the black sand on the beaches of Iwo Jima. The new title uses the words “Iwo Jima” — very clear, that — but it has no alliteration and no sense of mood or tone. It could be the title of a PBS documentary about an American mother in Iowa receiving letters from her son Caleb. It suggests dullness, softness…and gives no hint that it’s a film with an all-Japanese cast. Which, of course, is a very scary concept for typical American filmgoers.
Based on a story by Paul Haggis and Iris Yamishita and a script by Yamashita, Letters from Iwo Jima was made as a kind of mirror-companion piece for East- wood’s Flags of Our Fathers (Paramount, 10.20), which is about the legacy as well as the reality of American troops fighting on Iwo Jima. Letters, which Warner Bros. is distributing domestically (Paramount is handling it internationally) in January ’07, deals with the battle for Iwo Jima as experienced by Japanese troops. It stars Ken Watanabe (Memoirs of a Geisha) as General Tadamichi Kuribayashi, who led the battle against American troops for several weeks.
The new title probably alludes to the details of the conflict being revealed by letters written by Japanese soldiers to loved ones back home. The Japanese translation of Letters from Iwo Jima, as provided by the IMDB, is Iou Jima kara no tegami. It sounds sucky either way.
Nothing happens on a Clint Eastwood movie without Clint’s approval, but this has the whiff of something pushed along by Warner Bros. marketing. I called Haggis this morning to get the scoop (no reply so far), but five’ll get you ten some- body at Warner Bros. thought Red Sun, Black Sand sounded vague and arty, or they tested it and Average Joes said the same thing.
I could also suppose that the WB marketers may have appealed to Eastwood by reminding him that a similar- sounding film that he directed and starred in — 1990’s White Hunter, Black Heart — bombed.
This is the same kind of bottom-line marketing call that led to Taylor Hackford‘s 1984 remake of Out of the Past being retitled as Against All Odds. The movie-title mantra is always “make them simple and plain — metaphor and alliteration have no currency any more.”
Don’t call that Alfred Hitchcock-Cary Grant movie North by Northwest — call it Framed Innocence or Run For Your Life. If that 1959 classic never existed and a producer wanted to use that title for a new movie today, the marketing guys would test it and people would probably scratch their heads and say, “North by northwest of what? I don’t get it.”
In such an environment what chance does a title with the words “red sun” have? I don’t know if Red Sun, Black Sand was tested, but if it was I’ll bet 95% of the people who responded said, “What does that mean? The movie takes place in a desert or something? But hold on…what kind of desert has black sand? I’m confused.” And I’ll bet 99.5% of the people out there don’t know or care what Japan’s flag looks like. Don’t kid yourself — we live in Moron Nation.
Ask Jay Leno about this. I saw him do a question segment with people on the street on the Tonight show a few years back, and he asked a young girl to give the last name of a recent president whose first name was “Jimmy.” She didn’t know. “He used to be a peanut farmer…” Leno hinted. The woman still didn’t know but she took a stab. “Jimmy Peanut?”, she said.