Word around the campfire is that Nicole Kidman‘s performance as celebrated art-gallery photographer Diane Arbus is the best thing about Fur. As for the film itself, some are using the A word, as in “arty.” Or as in, “It turned out a little artier than what some in the loop were expecting.” 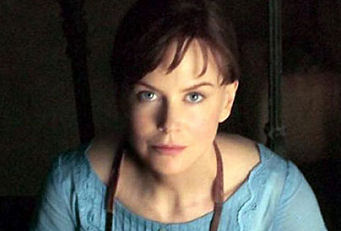 In some circles “arty” means index-finger-up-the-butt precious, but shouldn’t an Arbus biopic, of all biopics, have a kind of art-gallery feeling? An aura of artified apartness? If I’d directed this puppy I would have shot it in 35mm black-and-white.
The director is Steven Shainberg (Secrretary), who worked from a script by Erin Cressida Wilson and a book by Patricia Bosworth. Picturehouse is releasing Fur sometime in November, following what I’m told will be a debut at the Toronto Film Festival.
Arbus commited suicide in 1971 at age 48. Why is it that the final acts in the lives of so many gifted 20th Century artists (Arbus, Harry Nilsson, Sylvia Plath, Jean-MIchel Basqiat) end on a black note? Suicide obviously lends a quasi-tragic dimension and also gives the biographer or screenwriter an “ending”, but there are few cliches as groaningly tiresome as that of the self-destructive genius.