I’ve seen the initial one-sheet poster for Werner Herzog‘s Rescue Dawn, which will screen at the Toronto Film Festival, and it’s close to awful. It’s not Herzog’s doing but the film’s producers, Gibraltar Films (or perhaps its distributor, Conquistador Worldwide Media), and it’s utter mediocrity. The decision to allow the poster be dominated by Christian Bale‘s fleshy, overfed, clean-shaven face sends exactly the wrong message. 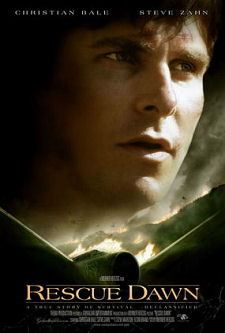 Bale’s puss is overbearing and the concept has no soul, no texture, no implication of poetry — nothing that suggests that the movie being sold is a Werner Herzog creation, which is as close of a guarantee of something layered and profound as you can find anywhere.
In fact, the poster says nothing except for the fact that Bale (represented with a photo that has nothing to do with how he looks in the film) is the star. It looks precisely like the kind of Cannes market screening poster/trade ad that a low-life distributor looking to cash in on Bale’s Batman popularity would throw together in a state of huckster desperation. There’s a coarse mentality at work here — you can smell it 100 yards off.
Rescue Dawn is an “action drama” (i.e., the producers wish it would simply be that) costarring Bale and Steve Zahn. Based on Herzog’s 1997 documentary Little Dieter Needs to Fly, it’s about German-born Dieter Dengler, a German-born U.S. military pilot who was shot down over Vietnam/Laos in ’65 and captured and then escaped from a jungle prison camp and eventually made it back to safety.
Here, apparently, is a black-and-white shot of Herzog speaking with Marlton — the hulking sumo wrestler-type gentleman with the black toupee/wig in the black sunglasses standing to the right. It’s a photo taken from the Gibraltar Films website.