Art of the Dodge

Art of the Dodge

What’s up with Fox Searchlight’s cards-to-the-chest History Boys campaign?
London publicists are preparing for a 10.13 opening, and so Nicholas Hytner‘s film is starting to screen for the press next week. With the pic opening stateside on 11.24, nothing’s doing here now. And yet — this is the unusual part — there are no plans to show the film version of Alan Bennett‘s Tony Award-winning play at the Telluride, Toronto, or Venice Film Festivals.

Portion of invitation to next week’s London screenings of The History Boys (Fox Searchlight, 11.24)

One interpretation is that Fox Searchlight marketers are so confident about Boys having the goods that they’re figuring they don’t need Toronto, Telluride or Venice.
Fox Searchlight COO Stephen Gilula wouldn’t respond to this, but said, “We want to do the right thing for the film itself, rather than satisfy expectations of the press and of conventional industry wisdom. We’re not playing a ‘game’ with this movie. Our first priority is to position it for the public, and not for the award community.”
< ?php include ('/home/hollyw9/public_html/wired'); ?>
Another speculation is that homoerotic content in The History Boys is making Fox Searchlight nervous, and they’re figuring it’s better to keep the talk down for now.
Gilula says that “content is not a concern for us…we have absolutely not had that conversation. We’re the company, remember, that distributed The Dreamers with an NC-17 rating, and also released Quills.”
One reason for not showing The History Boys in Toronto, Gilula says, is that “it’s a British play and a national icon there and they wanted the world premere to happen there. Plus the show is still playing on stage and we want to respect that.”
If you respect the pedigree of the Tony Awards and especially if you’re an avid reader of Movie City News, you’re probably assuming that The History Boys is in the running for possible Oscar awards — Best Picture, Best Director (Hytner), Best Adapted Screenplay (Bennett, who wrote the play), Best Actor (Richard Griffiths), etc. 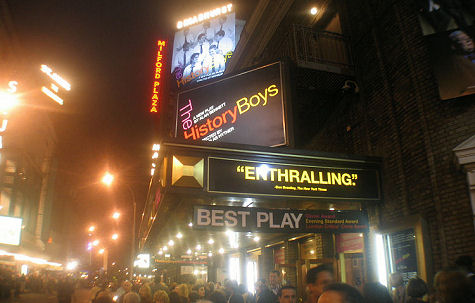 Because the currently-running Broadway play won six Tony Awards last June (including Best Play), and you have to figure at least some of the lustre will rub off on the film version. And because David Poland has link-blurbed The History Boys as a possible Oscar contender once or twice, and because MCN “Voices” contrib- utor Stephen Holt all but proclaimed The History Boys a multi-Oscar nominee in a piece that ran on MCN last June.
The Tony Awards sweep “paves the way for the film version of The History Boys to score heavily in the Oscar race, breaking out fast as an early favorite,” Holt enthused. “And Fox Searchlight execs on both coasts are understandably ecstatic about [the Tony Award win] and are going to focus all their Oscar-savvy energy on a major campaign for the film, which opens in the U.K. in October.”
But not showing a film of this type at one of the big prestigious September festivals is a definite eyebrow-raiser.
The rulebook says if you have a high-pedigree film opening in the mid-to-late fall that looks like a possible Oscar contender (like last year’s Brokeback Mountain or Capote), you take it to Toronto or Venice or Telluride. Period. You couple your openings at Telluride and Toronto, or at Toronto and Venice, or you go for a trifecta.
If you don’t do this, you either (a) don’t quite have the quality everyone’s expecting, or (b) you do have this and you’re figuring you don’t need early-fall festival buzz to start things off, or (c) you have the goods but something’s holding you back. A concern, say, about a subplot involving an iconoclastic middle-aged teacher who has an occasional thing about fondling the genitals of his male students. 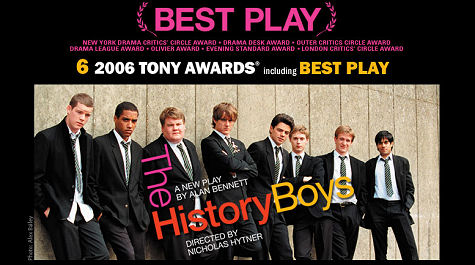 A Fox Searchlight rep told me this morning that one reason for The History Boys not going to Toronto is that the mostly all-male cast can’t get out of their daily performances in the Broadway show. Except nobody in the press knows the cast members very well, and the general public doesn’t know them at all. In any event the press would much rather talk to Hytner or Bennett.
And if the cast is really the reason, why not show The History Boys movie at the New York FIlm Festival, which would eliminate the can’t-travel issue?
I’m told that Telluride honcho Tom Luddy made an overture about seeing The History Boys for possible consideration, but that he was told no-go.
“If you really have something, you don’t have to take it to Toronto,” an Oscar campaign consultant said earlier today. “If you feel you need to prove yourself, and if you really want people to talk about your film, you take it to Toronto or Venice or Telluride…but if you’re absolutely sure that you’ve got the goods, you don’t need a festival.”
And if this isn’t what’s going on…well, here it is again.
After the Tony sweep it seemed as if The History Boys had instant credibility as a year-end Oscar contender. I wrote, however, that “I don’t think that’s necessarily true.” 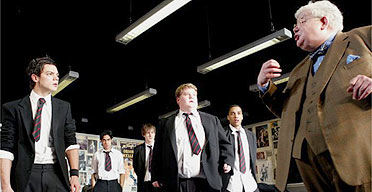 I saw The History Boys last May, and it’s a brilliant and impassioned tribute to the glories of inspired teaching, and of passing along those things that truly matter in life.
In the film, Griffiths (best known as Harry Potter’s mean-spirited Uncle Vernon) will repeat his Tony-winning stage performance as an eccentric history instructor in an English boys’ school who’s expected to prepare them as best he can for university entrance exams, but is forced to leave his post when the school’s headmaster learns about his erotic fondling of some of the students.
There’s a longstanding homoerotic tradition in dramas about English schoolboys and boarding schools (reflections of this were in Lindsay Anderson’s If) and it’s certainly no big deal to X-factor types.
The idea seems to be if you’re broadening a student’s mind with profound teachings (as Griffith’s History character certainly does), copping a discreet feel is a forgivable impulse/indulgence, but it’s a different story if you’re a priest passing along repressive Catholic dogma.
“Toronto is over two months before the History Boys [U.S.] opening,” the consult- ant says. “And when you have a film with complicated issues or feelings that you don’t want percolating for too long, you don’t want to show it too early. 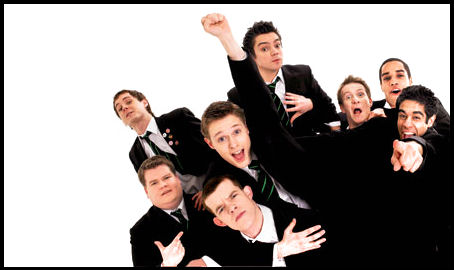 “Everything is a moving target these days. The media changes, people’s tastes change…and maybe the world is ready for a fondling teacher. But the American public’s interest in sexual content is nil. They can’t handle sexual content, and maybe [Fox Searchlight] doesn’t want it out there too early because of this. They don’t know what the reaction is going to be.”
A gay guy who attended the same History Boys performance that I saw last May confided that he was mildly offended by the genital-fondling aspect. I figured if this guy was slightly put off…
“If it’s somewhat challenging material, no one’s going to fire you for saying no and not exposing it early,” the consultant concluded. “It may be better to be safe than sorry. Challenging material is just that…challenging. And there ‘s no projecting what’s going to happen. Maybe everybody took a step back and said, ‘Let’s not.’ Why give it two months to percolate before it opens?”
I read this to Gilula and he repeated, ” There’ s been absolutely no conversation about content at all regarding plans plans for the film. We’re not concerned about that. Content is not an issue.”