Japan Gets Clint Better Than We Do

Japan Gets Clint Better Than We Do

This Japanese trailer — short and hard but quite intriguing, especially in its use of desaturated, close-to-monochome color — is very clearly promoting Clint Eastwood‘s Flags of Our Fathers and Letters from Iwo Jima (i.e., formerly known as Red Sun, Black Sand) as war films joined at the hip — as an epic-scaled, double-dip, you-can’t-see-just-one experience.
The emphasis in the Japanese trailer, naturally, is on star Ken Watanabe — he has the longest dialogue clip — and other Japanese actors who will (apparently) appear only in Letters. (The Flags of Our Fathers script I read earlier this year has no Japanese speaking parts.) The trailer shows glimpses of American cast members — Jesse Bradford, Adam Beach, etc. — but that’s all. 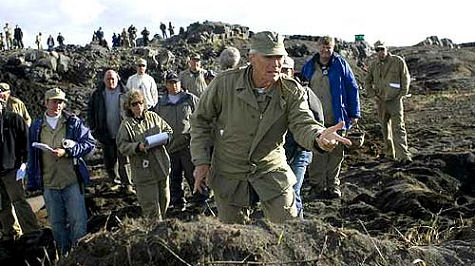 Clint Eastwood during shooting of Flags of Our Fathers (DreamWorks/Paramount, 10.20)

What’s especially interesting are the Japanese release dates, as confirmed on the Japanese website: 10.28.06 for Fathers (which is odd because 10.28 is a Saturday) and 12.9.06 for Letters . The U.S. release dates, however, are 10.20.06 and sometime in January 2007, respectively. There’s no locked-in date for Letters at this point, or so I’ve been told.
DreamWorks/Paramount has kibboshed the idea of both films coming out on these shores in the same year — they want Letters to mainly be regarded as aesthetic support for Flags of Our Fathers, which, of course, is what the Oscar effort will be all about.
< ?php include ('/home/hollyw9/public_html/wired'); ?>
Flags is the primary film in Eastwood’s head — a time-trippy art movie about how Iow Jima veterans feel about the notions of heroism and standing with their buddies — as well as the American side of the Iwo Jima issue, and DreamWorks/Paramount thinks (or so I gather) that Academy members will be confused as to which film to vote for if both films are released in late ’06.
Maybe DreamWorks/Paramount also figured Academy members would complain about having to digest two movies as a single thing. And that they might complain about sore rears. That sounds shallow, but you wouldn’t believe how some Academy members talk about moviegoing during Oscar season. Their irreverence is amazing. 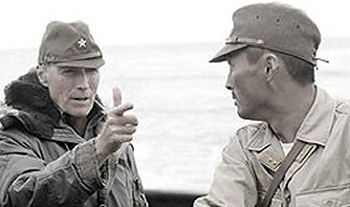 Maybe DreamWorks/Paramount is right but I don’t agree — cluelessness and shallowness should never be catered to — and I’ve been saying so for a while now.
I’ve thought all along that these films should both be released in late ’06, because they need to be absorbed as one big single war epic and regarded as a single entity by Academy members. I think these films should be released just as they’re being released in Japan — in late October and early December — and that they should appear on the Oscar ballot together — Flags of Our Fathers & Letters from Iwo Jima as a one-vote, one-movie deal.
That’s out the window, of course, and too bad but that’s that. But sooner or later the films will be offered together as a double-disc DVD, and it would be fascinating to see them shown as a big double-feature in theatres. I don’t think they can be cut together like Francis Coppola cut Godfather I and II into The Godfather Saga (i.e., that piece that ran on TV in the late ’70s) but maybe that’ll happen down the road…who knows?
I know that in my head, at least, I’ll always see Flags of Our Fathers and Letters from Iwo Jima as the ultimate Siamese twin World War II movie. 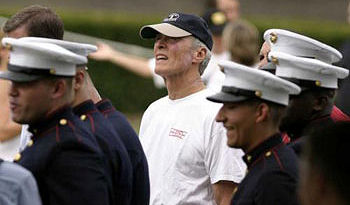