The increasingly bizarre saga of John Mark Karr is going to be at least a low-budget movie one day. It’s a movie if he ‘s lying about having murdered Jon Benet Ramsey, and it’s a movie if he’s not lying. Especially given his alleged interest in having taken steps in Thailand to have a sex-change operation. 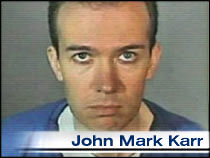 Producers of dark crime dramas are always attracted to real-life creepy killers, and while nobody knows anything it does seem as if Karr fits the general profile. He’s building up a resume that may lead to his becoming the next superstar monster. If his guilt is proven he’ll have joined the pantheon of famous fiend-murderers like Ted Bundy, Ed Gein, Richard Speck, etc. If he turns out to be delusional he’s still a world-class creep wo’s been after little girls for a long time. A loathsome creature, yes, but also the kind of diseased boogeyman that Hollywood wants.
If producers don’t make a movie of Karr’s exact history they’ll almost certainly make one that’s been inspired or suggested by his history. You know it, I know it. Karr’s saga, depending on how it plays, could be the basis of the next The Silence of the Lambs. Or maybe a kind of twisted-perverted Girls Don’t Cry with an unsympathetic lead character instead of a sympathetic one.
I realize that Hilary Swank, say, would never consider playing a guy again, much less Karr, but the way to cast Karr, I’m certain, would be to get a woman to portray him. That would make the movie even freakier. Look at his photo…it’s obvious. Question is (and I realize how creepy this sounds), what actress could they get to play him? What actresses are the right age, which ones are good or brave enough?
Oh, my God — T.H. Ung has just suggested Naomi Watts and she’s right. Watts would be dead perfect. (Somebody needs to take her face and photoshop Karr’s hairline and prison uniform on…anyone?)