I’ve seen thousands of films with rote, static, or unimaginative camera work, particularly those made between the nascent sound era of the early 30s up until the beginnings of the influence of Italian neorealism in the early ’50s and the hand-held, free-form era of the French nouvelle vague in the early ’60s. Laurence Olivier was, I suppose, not an especially exciting or inspired director, but his three best-known Shakespeare films — Henry V, Hamlet and Richard III — never struck me as being particularly labored or tedious or difficult to sit through. 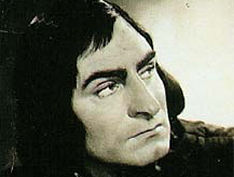 These three films were mainly about text, acting and visual clarity, and Olivier’s shooting of them never got in the way of these things.
And yet here, out of the blue, is N.Y. Times DVD columnist Dave Kehr all but spitting on Olivier’s grave by saying his work may be slightly worse than that of Ed Wood’s — seriously — in a brief review of the Criterion Collection’s just-issued Olivier Shakespeare box set.
“Olivier might have been a great actor, but he was one of the klutziest directors who ever lived, and seeing these films, with their static arrangements of actors, pointlessly peripatetic camera movements and bizarre framing, makes one appreciate again the deep commitment to cinema represented by the work of Edward D. Wood.
“Hamlet is the best of the bunch, a Freudian interpretation focused on the prince’s sexual disgust with his adulterous mother (all ambiguity has been eliminated) and dressed up with billowing clouds of dry-ice and angular, expressionistic sets that strongly resemble Orson Welles‘s back-lot Macbeth of the same year. Richard III, now with its Technicolor buffed up and its VistaVision aspect ratio restored, still remains a mighty soporific. All three are better heard than seen.”
And Olivier’s Henry V concept of starting the film at London’s Globe theatre and gradually opening it up into big studio sets and outdoor locations….that was chopped liver? It was fairly out there idea for its day, and it’s still moderately engaging by today’s standards. Kehr must have a serious bug up his ass about something when he wrote this.