The consensus is already getting around: Snakes on a Plane is sorta kinda tolerably entertaining. As in sometimes hilarious, amusingly cheesy here and there, never out-of-this-world brilliant, fitfully amusing…a guiltless B movie all the way. 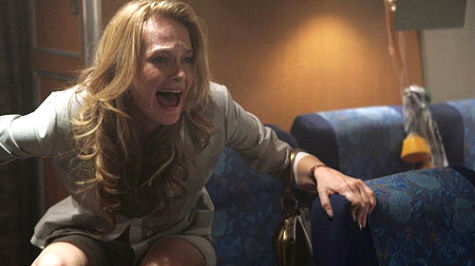 Make that a B-minus. Watching cheeseball thrillers can make you feel like you’ve got a virus of some kind, and this one definitely put something in my blood. But it has maybe seven or eight good laughs (okay, nine or ten), and a good ending with Keenan Thompson (the cool fat-ass in the orange shirt) delivering some funny lines. And I loved it when Gerard Plunkett, playing a snarly-ass middle-aged businessman…I’d rather not spoil. But Plunkett does two things that are quite funny.
It’s significant that Snakes didn’t irritate me all that much. It’s also significant, however, that watching it felt so uneventful that I couldn’t make myself write a review last night after I got home around midnight. It’s hard to get it up when all you have to say is “I wasn’t in pain.”
< ?php include ('/home/hollyw9/public_html/wired'); ?>
I was shaking my head at times at the some of the over-acting and tepid dialogue. The first 15 or 20 minutes (i.e., set-up sections shot on one of the Hawaiian islands) is on the level of, say, a Charlie’s Angels episode from the early ’80s, and that’s pretty damn awful. Byron Lawson’s performance as Eddie Kim, the criminal who arranges for a big crate of poisonous snakes to be unleased on a Honolulu-to LAX jet, is the worst element by far.
The damn thing is overlit for the first 25 to 30 minutes, in the manner of big-studio movies of the mid to late ’60s. Director David Ellis knows, I’m sure, that when planes take off the really bright lights in the cabin (i.e, the ones that are turned on when a plane lands) are never used, and also that most of us know that. But he flood-lights the hell out of these scenes anyway, and this just takes you right out of it. 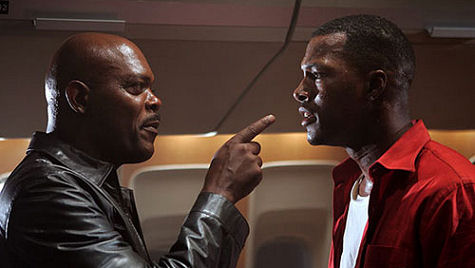 But Snakes never turns bad-bad. It’s lazy, goofy and often sloppy. Ellis isn’t a terribly clever action director — not in my book. But he’s not incompetent and the film isn’t horribly crafted. It’s just not very hip.
I just wish Ellis had gone more nutso. I wish that someone had gotten sucked out of the window as the plane is approaching the coast of Los Angeles and that the camera had stayed with this person as he/she splashes into the Pacific…and lives. I was hoping one of the really big snakes would eat the baby. I wanted to see one of the big snakes act like a phallus and sexually invade one of the terrified females. (Elsa Pataky, I was hoping.) Well, why not? This movie isn’t about logic or sensitivity — it’s about pushing the bounds and making the fans howl. As long as we’re talking about snakes-as-penises, why not have one of the fat black guys get anally penetrated by a python?
Most of the snakes are CGI-ed or substandard animatronic. I didn’t believe anyone was being threatened, not for a second. It’s about cartoon snakes on a plane. And stupid sound effects with the snakes hissing and growling and whatnot. A lot of this film is really quite lame. 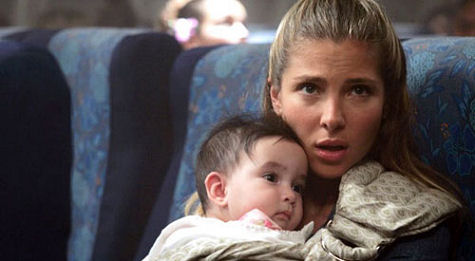 I would have had a better time if Ellis and New Line has done a shot-for-shot remake of Tobe Hooper and Piers Haggard’s Venom. Seriously — that’s a pretty good deadly-snake exploitation flick. It’s just about a single black mamba and when one of those babies bite you, forget it.
There is one totally brilliant moment when Flex Alexander is chatting up Rachel Blanchard and he’s interrupted by the sound of a guy sitting nearby blowing snot out of his nose. Flex and Rachel look at this guy and we see him wiping his pants with his snot in order to get it off his hands. I usually despise gross-out humor but the absolute lunacy of this bit is inspired. Why show a passenger doing a point- lessly gross thing? The fact that Ellis does it anyway is a stroke of mad genius. He should be proud of this bit…seriously.
Samuel L. Jackson is pretty good, not great — but the moment when he yells out the big line (“I’ve had it with these mothahfuckin’ snakes,” etc.) is very neat. Todd Louiso is a very subtle and gifted actor who’s under-utilized here. (Naturally.) David Koechner and Bobby Canavale…forget it. They’re fine but in a film like this all performances are a losing battle. 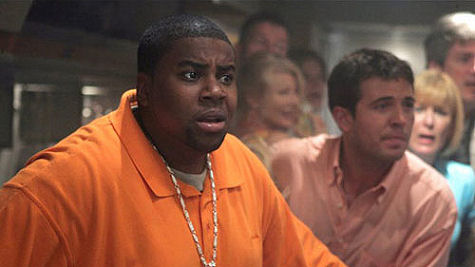 I hope Elsa Pataky lands more roles in U.S. films. She’s hot and fetching and I liked her in that Maxim spread. Her eyes say dirty things.
The flatness of much of this film is conveyed in the opening titles. First of all, it’s a mark of mediocrity when a film begins with a helicopter shot of a big scenic locale. It’s the director saying to the audience, “All right, relax…I have no imagination and you’re not the brightest bulbs on the planet for paying $10 bucks to see this thing, but that aside, here’s the scenic area where our story begins.”
Sure enough, Snakes starts with a lame helicopter shot. Sun, surf…breaking waves! Then we see a title card that says “SNAKES” (beat, beat) and then comes the addition of “ON A PLANE” — and as soon I saw this, I knew what I was in for. This, sadly, is the predominant Ellis touch rather than some guy wiping snot on his jeans.