This photo of the late Jayne Mansfield, taken from a dance-hall sequence in Raoul Walsh ‘s Sheriff of Fractured Jaw (’58), is taken from Dave Kehr‘s DVD column on the N.Y. Times site. Some Times guy working for the tech squad has obviously squeezed it horizontally, and the effect is more than weird. It’s almost spooky. 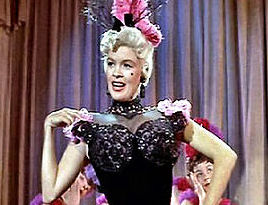 Mansfield’s face somehow reminds me of Don Keefer‘s on that Twilight Zone episode called “It’s a Good Life” — the way Keefer looked after being turned into a plastic jack-in-the-box head, I mean. A mere photo hasn’t creeped me out this much since I was six or seven years old.