I filed “Apocalypto Later ” about 15 hours ago, and I’ve since read all the responses and elicited some new thoughts and the consensus, boiled down, seems to be this: Americans are not the media, and are fairly racist deep-down and don’t really care that much about Mel’s anti-Semitic rant so don’t worry about any negative reactions to the film, especially with some people apparently being more inclined to see Apocaylpto because of this episode. 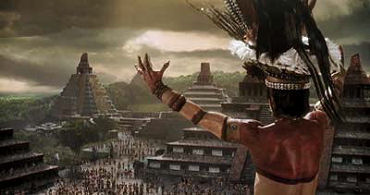 The other factor is that unless Gibson himself asks for a release-date delay, Touchstone, the film’s distributor, is pretty much obliged to be supportive of Apocaylpto because not being supportive sends the wrong message to other filmmakers, and so the film will probably come out on 12.8 and that’s that.
Repeating for clarity’s sake: this seems to be a “consensus” view, okay? It’s not necessarily my own view that Americans are racist — it’s what people are telling me. Got it?
An industry consultant says that Apocalypto “is so out there” — foreign language, exotic Mayan culture backdrop, guys in loincloths and face-paint carrying spears — “that it won’t be a true test of Gibson’s popularity waning or waxing. I doubt most of America will punish Mel for anti-Semitic remarks as most of them are bigots themselves. This is a very bigoted country.
“Before this happened Apocalypto was a marketing challenge, to say the least. There’s a question about the film not having a strong villain, and without that you don’t have a strong hero figure. So how do you get people to see this movie? People don’t go to see the best foreign-language fims in this country, so I wonder how you’re going to get them to come see this one except…you have to wonder, you really do have to wonder…if it was sold as ‘this is the film Hollywood Jews don’t want you to see….if you want to see more Jesus films, go see this one.'”
The Touchstone situation is this: (a) The studio has a close relationship with Gibson dating back to Ransom , and yet the company at large does not; (b) Unless Gison asks them to delay the release date (which is possible), or corporate gets queasy (also possible), it’s doubtful that Touchstone will blink or do anything that looks unsupportive; and (c) The campaign will be much trickier now, but that will be the case anyway with a March of April ’07 release date since the press will resurrect the anti-Semitic drama no matter what.
And finally, I want to make sure everyone considers an idea floated by reader Nate West — an envelope-pushing comedy called Meet the Rabbis that you just know everyone would want to see, no question. The basic plot involves an aging, drunken movie star who blows up his career with a stunning racist tirade. Then he’s forced to attend sensitivity sessions with two rabbis played by Ben Stiller and Steve Carell. Of course, the funny part is that deep down he really does hate Jews. Even funnier is that his public doesn’t much mind that he hates Jews, because either they don’t know any or they hate them too.
In all seriousness, if Gibson, Stiller and Carell were to make this film — and of course, if it turned out to be as dark and funny as the premise suggests — Gibson’s troubles would be over. He would be totally in the clear…but the film wouldn’t work if Gibson didn’t play himself as bluntly and candidly as he probably really is, deep-down.