After seeing Patrick Stettner‘s The Night Listener at a Sundance screening last January I wrote that “watching it felt like being in a kind of prison…a windowless isolation cell in Iraq during the Hussein regime. It’s a movie for dead people — the whole thing feels entombed. Almost every shot is enveloped in shadows and blackness, and your kindly torturer is a bearded and withered-looking Robin Williams . ” 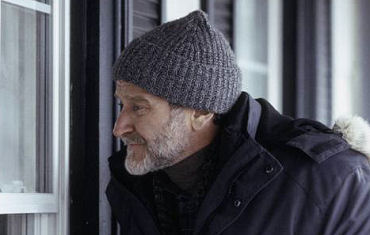 Well, I saw it again last week and Stettner’s film has been slightly trimmed and tightened since Sundance. I got through it with less grimacing. But it’s still slow, shadowy, grim and odd.
Co-written by Stettner, novelist Amistead Maupin and Terry Anderson (and based upon a true episode in Maupin’s past) , it’s about a gay radio talk-show host named Gabriel (Williams) who’s become intrigued by a young AIDS-afflicted kid (Rory Culkin) he’s spoken to on the phone but has never seen, and about his search for the boy and some very curious encounters with a blind woman who says she’s the kid’s mom (Toni Collette ).
I haven’t read any reviews that have brought this up, so I guess I’ll have to: a 50ish gay man developing a fondness for a 14 year-old boy over the phone — hello? — feels icky.
A gay journalist friend explained to me last week that older gay guys having nurturing relationships with teenage boys isn’t necessarily what it seems to be. It can just an uncle-mentor type thing. Okay, but turn this around for a second. Would any movie deliver a story about a 50ish straight guy getting into a close relationship with an afflicted 14 year-old girl, and then have him try to visit her at home? Anyone who watches The Night Listener will be wondering about the undercurrent. But all the reviewers are dancing around it.
N.Y. Times critic A.O. Scott has written that “we understand that Gabriel, who nursed [his ex-boyfriend] through a period of life-threatening illness, needs someone to protect and care for, and that [Culkin’s character] represents a beguiling mixture of toughness and innocence”…and not a word about what anyone seeing this film would definitely be thinking.