From: Jeffrey Wells, Hollywood Elsewhere. To: Dreamamount publicity/ marketing. Re: An open letter about the selling of David Fincher‘s Zodiac (currently set for release on 1.19.07). 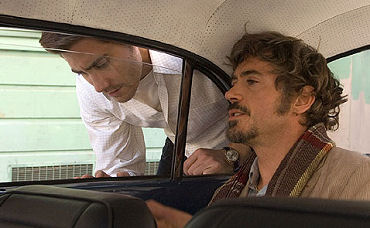 Greetings and salutations, guys: I’m writing to ask what the upside is in not platform-releasing Zodiac at the end of December, which is what certain Dreamamount parties are apparently against at this stage. A late December release, obviously, will put Zodiac into the derby and make it eligible for whatever possible critic awards and or Academy nominations that may result. This, obviously, would fortify the 1.19 general release to some extent.
Not putting Zodiac out as an ’06 platform end-of-December release strikes me as nonsensical, certainly from the standpoint of Zodiac‘s admirers or from the stand- point of any kind of opportunistic, fair-shake approach to creative marketing. Very clearly, going out cold on 1.19 without the buildup of a December platform opening isn’t going to help.
Zodiac is, I’m hearing, a serious quality-level piece. It’s also a longish cerebral procedural, a ’70s period drama, a non-conventional cop thriller. It needs some media massaging to help prime the pump.
The word around town is that there are two reasons that certain parties with Dreamamount may be against the platform-release idea:
(a) Dreamamount will have four films in Oscar contention by the end of the year (Flags of Our Fathers, Dreamgirls, Babel, World Trade Center) and some p.r. and marketing people think that a fifth film in the hopeful-Oscar-pipeline will strain the resources of Dreamamount marketing/publicity and cause this or that film to receive less of an Oscar push effort in terms of manpower and/or ad dollars, and…
(b) DreamWorks honcho David Geffen wants an all-out, balls-to-the-wall Oscar push for Dreamgirls, which is his personal baby, and he doesn’t want to hear about a fifth film potentially sapping the energy or marketing budgets allocated for Dreamgirls push.
What does Paramount/DreamWorks think about all this? What do readers think? Is there merit to the David Geffen theory? This issue has been festering for a long while and I’d like to get some reactions from all corners.