If I could clap my hands three times and rid the world of the Mozilla ActiveX plugin, I would clap my hands three times. You need to load the damn thing to watch trailers on the AOL Moviefone site but which it won’t load. The latest trailer I can’t watch because of this problem is one for Barry Levinson‘s Man of the Year (Universal, 10.13.06), an allegedly shrewd and restrained political comedy with Robin Williams, Laura Linney and Christopher Walken.
A friend who saw Man of the Year at a small screening a few months ago swore up and down it’s funny and corrosive and Levinson’s best since Wag the Dog. But I couldn’t accept her word (she’s not the most cultivated cineaste) so I called Barry’s reps and his producers to ask some questions about it, and they all said “who?…what?…too early.” 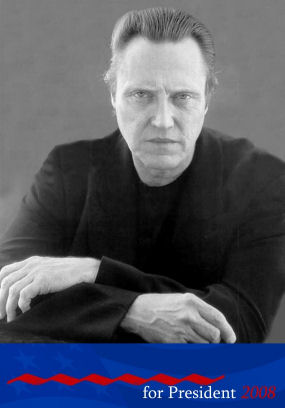 No director has swerved up and down and back and forth like Barry Levinson. Whenever a new movie of his comes along, everyone always asks, “Will it be a good Barry or a bad Barry?” There are actually two bad Barry’s — the guy who makes expensive commercial crap (Sphere, Indiana Holmes and the Temple of Doom) and modest, lower-profile commercial crap (An Everlasting Piece, Envy, Bandits). The good Barry, of course, makes films like