Whaley was the guy

So it was Frank Whaley‘s paramedic character in World Trade Center — a real-life guy named Chuck Sereika — who was the first to crawl “into a burning black hole in the unstable pile of debris that was once the World Trade Center, and was the first man to reach trapped Port Authority officer Will Jimeno” — the guy played by Michael Pena. But in Oliver Stone’s film, the guy who goes in first is NYPD officer Scott Strauss (played by Stephen Dorff). 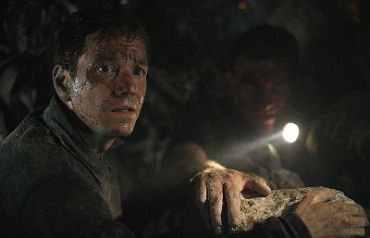 So reports Rebecca Liss in a Salon piece that went up two days ago. (Old news! The nostalgia file!) “Perhaps it seemed more dramatic or believable to the filmmakers for the NYPD to make this daring rescue basically on their own,” she writes. “Whatever the filmmakers’ reasons, they missed one of the more remarkable aspects of this rescue story.
“Sereika, a man with no training in collapsed-building rescue and extrication, risked his life that day for men he had never met. Sereika said he was sure he would die when he crawled in. Unlike the police and firefighters who without hesitation sacrificed everything — and I in no way discount their selfless acts — Sereika was not called to duty by his unit. He arrived on his own accord.
“Serieka was a paramedic, but his license had expired and he had left that life behind as he sought treatment for addiction problems. But he grabbed his medic sweatshirt and his cell phone and headed down to Ground Zero to see if he could apply a few splints or perform minor triage. He never imagined that he would be involved in one of the few and most memorable rescues of Sept. 11.”