Here it is not even Labor Day, and it’s looking more and more likely that the two strongest Best Picture contenders are going to be Flags of Our Fathers and Dreamgirls, which in itself is going to make this a phenomenal Oscar campaign year for Paramount /DreamWorks (a.k.a. “Dreamamount”), which is distributing both. 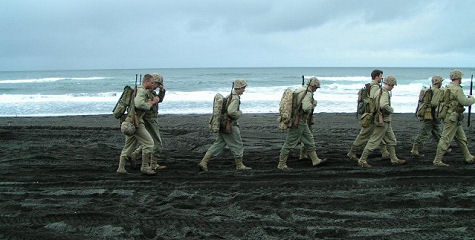 Shot during the filming of Clint Eastwood’s Flags of Our Fathers (DreamWorks/Paramount, 10.20)

Keep in mind also that one other Paramount release — Alejandro Gonzalez Innaritu‘s Babel (Paramount Vantage) — is also regarded as a probable awards- level thing. Not to mention the possibility of Paramount’s World Trade Center eeking into one of the five slots as a kind of sentimental favorite. Four Best Picture finalists from the same studio — it could happen.
But I’m all but convinced it’s going to come down to a Flags vs. Dreamgirls thing — a mano e mano on Melrose Ave. I’m saying this because of fresh perceptions of extremely strong emotional currents in both. And because, as one strategist notes, “there’s such a shallow pool of obvious [Best Picture] contenders from our current vantage point of mid-August.”
< ?php include ('/home/hollyw9/public_html/wired'); ?>
Some surprise movie may come along in a month or two and rewrite the picture — “”it happens every year,” the strategist says — but right now no one can see what film that might be. And I spend every damn day trying to figure this stuff out.
How do I know it’ll be Dreamgirls vs. Flags of Our Fathers? I don’t as far as Flags is concerned, having only read the script and seen this morning’s Japanese combo trailer (i.e., Flags plus Letters from Iwo Jima).
But count on this : (a) the personal-anguish-of-soldiers factor, which Flags is full of top to bottom, is going to resonate to some extent (maybe a large extent) in the hinterlands among the support-our-troops-in-Iraq contingent, and (b) this big-scale tribute to the World War II generation is going to sink in big with boomer-aged Academy members. 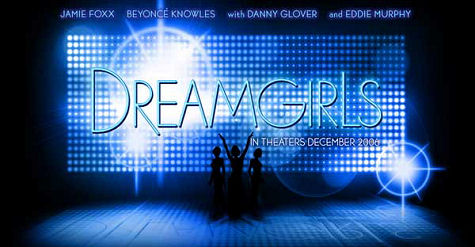 I wouldn’t be saying this if Flags was just standing on its own — it could fade or come up short, you never know — but the Flags-plus-Letters from Iwo Jima factor (joined-at-the-hip movies using the same history and locale) is going to impress the hell out of Academy members for the same reason that actors who gain weight or put on fake noses or speak in exotic accents always tend to get Oscar-nomina- ted — because the effort that went into it is so obvious, and because no director has ever done something like this before.
And having seen portions of Bill Condon‘s knockout Dreamgirls again last night I’m dead certain it’s a Best Picture lock. Four scenes were shown, and each was emotional, exuberant, tight as a drum, perfectly staged and performed, and edited with the skill of a diamond-cutter.
And yet when you think about the Flags vs. Dreamgirls competish, it feels like a bit of a muddle because their Oscar campaigns are going to be run by two execs collecting Paramount paychecks — DreamWorks marketing executive Terry Press and Paramount marketing chief Gerry Rich — and who will have to split their loyalties and energies in two directions.
Flags and Dreamgirls originated as DreamWorks projects, of course, and Press is going to be handling the marketing for both, but she and Rich will be making the Oscar campaign moves — and this may look to some like an operation at cross purposes.
Press listened to my questions and declined official comment, but let’s look at this situation as best we can.
One, there’s a huge influx of Miramax and DreamWorks marketing veterans on the Paramount lot these days, and these people know their way around the Academy rodeo. Paramount is a studio, remember, that hasn’t been in a major Oscar campaign since Titanic, which was nine years ago. 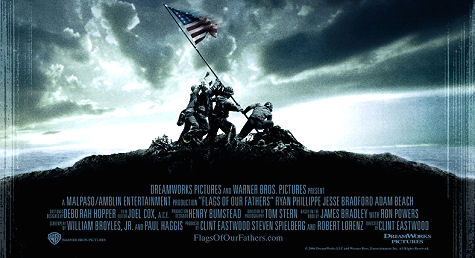 Two, there’s no Paramount logo on the Flags of our Fathers one-sheet. Think about that.
And three, Warner Bros. is is the international distibutor and co-financier of Flags of our Fathers, and Warner Bros. will be the the domestic distributor of Letters From Iwo Jima…so there’s that element to consider.
Simultaneous Oscar campaigns for films released by the same studio have happened before, of course. Miramax had its own Life is Beautiful vs. Shakes- peare in Love competing for the Best Picture Oscar in ’98. Disney had The Insider running against The Sixth Sense in ’99. Miramax had The Aviator vs. Finding Neverland in ’04. Universal had Field of Dreams vs. Born on the 4th of July in ’89.
But Life is Beautiful was never considered a Best Picture front-runner, and neither was The Sixth Sense or Finding Neverland. The only analogy that really fits is the Field of Dreams vs. Born on the Fourth of July one.
If it comes down to a Flags vs. Dreamgirls standoff, the ideal situation, of course, would be for Press and Rich to push both with equal vigor. Press is a pro and will naturally strive to do that. She seems to be making the right moves by hiring outside Oscar campaign consultants for both films — Amanda Lundberg for Dreamgirls and a not-yet-finalized hire for for Flags. 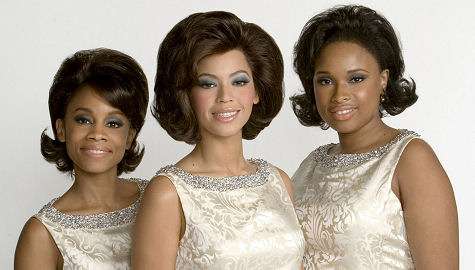 But one studio insider who also knows his way around the racetrack sees other forces at work.
“It’s really not Terry Press making the call here,” he said. “This is about Spielberg and Katzenberg and Geffen…this is Geffen’s movie, Dreamgirls…and it’s about how these guys are joined in the planning the future of this studio. Dreamgirls is going to get the big push — it’s a non-contest.
“And I think Eastwood knows that, and I’m not so sure he even cares about playing this game at this stage in his life. But look at the power DreamWorks has at Para- mount these days, and you have to consider the hard reality, which is that from the DreamWorks/Paramount perspective, Clint is a 76 year-old director who’s basically a Warner Bros. guy on hiatus.”
The other strategist says “the reality is not Clint’s age but the fact that he’s won twice” — i.e., Best Picture Oscars for Unforgiven and Million Dollar Baby — “and that he won last year.”

August 15, 2006by Jeffrey Wells28 Comments
« Previous post
Goldstein on bummed-out critics
Next post »
Japan Gets Clint Better Than We Do