When I was living in my cockroach-infested, struggling-young- journalist Soho pad in the late ’70s, there were all those Jean Michel Basquiat SAMO graffiti pieces painted all over Soho and the Bowery.
SAMO was Basquiat’s graffiti alter-ego — it basically meant “same old shit‘ — and I remember being hugely disappointed when I met Basquiat himself on a street corner and he told me in passing it was pronounced “same-oh”. I had always preferred “sam-oh”. 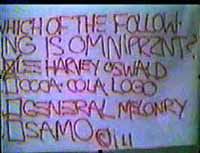 Some of the slogans were “SAMO as a neo art form,” “SAMO as an end to to mindwash religion, nowhere politics and bogus philosophy” and “SAMO as an escape clause.”
Anyway, I’ve never forgotten a certain SAMO graffiti that said the poiltical power of McDonalds had become equal to that of the CIA or the Vatican. I saw it somewhere near Broadway and Prince. That was something like a Major Moment for me, burned into my brain. McDonald’s = pernicious, anti-human, scourge of cvilization.
McDonalds is on the wane these days. In this country, anyway. The fearsome corporate franchise beast of 2006 is Starbucks, of course. Which is why I paid attention a week or so ago to that story about actor Rupert Everett joining forces with his Bloomsbury district neighbors to try and prevent a Starbucks outlet from moving into the neighborhood.
And then it all came together today with one big whammo when I saw this world map about the spread of the Twin Corporate Cancers of Starbucks and McDonalds.
The chart says there are 6200 Starbucks around the world with an average of 3 new outlets opening each day, and 13,000 — 13,000? — McDonalds around the world generating $41 billlion in annual income. That doesn’t sound right, does it? Sounds light. If someone told me there were 130,000 McDonalds outlets worldwide, I would buy that.