The surprise-heat movie of the weekend is Disney’s Step Up, a teen dance-romancer that got a failing grade on Metacritic (50%) and a much worse number on Rotten Tomatoes (19%). But it was the #1 movie yesterday, doing $8,499,000 and beating out the #2 Talladega Nights and #3 World Trade Center . The final weekend tally for Will Ferrell’s NASCAR flick is expected to nudge it into first place, although Step Up is expected to finish with a higher-than-projected $21,240,000. 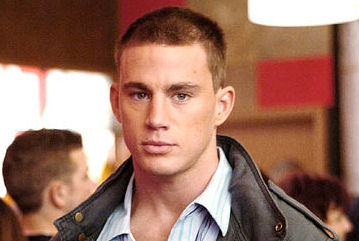 The Step Up surprise was mainly about ace-in-the-hole Channing Tatum, the 26 year-old hunky male lead from Alabama who’s very hot now with teenage girls. (His previous punch-throughs happened in Coach Carter and She’s The Man — he had an uncredited bit part in War of the Worlds.) My son Jett, 18, said “the girls in the audience were gasping” whenever Tatum was on-screen during a She’s The Man show he went to last March in Boston.
I can smell piece-of-shit teen flicks like this a mile off, which is why I didn’t catch the press screening. But magnetism that works is always worth checking out, which is why I’ll probably pay $11 bucks plus parking , popcorn and a coke to sit through this thing (well, part of it) sometime later today or tonight. $20 bucks to watch Channing Tatum! Maybe I’ll learn something.
My favorite review blurb is from Chicago Reader‘s J.R. Jones, who wrote that “this teen chick flick is so perfectly calculated I wouldn’t be surprised if every i in the screenplay were dotted with a little heart. Any guy who sits through this date movie deserves to get to third base at least.”
If you go by MCN’s predictions chart, everybody was way, way off on this one. Coming Soon foresaw Step Up earning $11.1 million this weekend, Box-Office Guru said $8 million, Hollywood Reporter $13, Poland predicted $9, EW $11 and Box Office Mojo said $10.5. Thursday’s tracking indicated a late surge and a figure between $12 and $15 million, but that was still a short call. Nobody saw this one coming. Those tracking-survey guys had better figure some way to get to younger types on their cell phones and not just depend on land-line surveys.